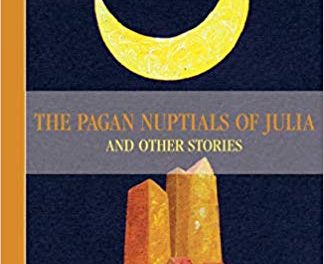 I am a voracious reader, one who often reads books simultaneously.  So it was that last week I was working on a book recommended by several people, Chuck Palahniuk’s Fight Club and a book I had picked up at the QWF Book Fair at Concordia this past weekend, Keith Henderson’s marvellous collection of short stories, The Pagan Nuptials of Julia.

First off, Palahniuk’s “novel” (and I use the term loosely) is crap. Sure, it takes on the theme of how men have innate violence within, but so what? Critics say this is “edgy” writing with a voice and tone that is purportedly slick, “hip” and “original,” but to me the book reads like a poorly written Trump Tweet.  I stopped reading after 75 pages and flung it into my recycling bin to take to Renaissance.  Life is too short.

And then I opened Henderson’s collection and was immediately captivated. Here was an original voice and sensibility that stopped me in my tracks.  Henderson is an intellectual in the truest sense: he makes no apologies for presenting complex ideas, occasionally erudite references, and multi-lingual commentary.  His is writing that demands work and engagement on the part of the reader—engagement that is richly rewarded.  The stories in The Pagan Nuptials of Julia are multi-layered and present characters as complex individuals, enacting their lives in confusion, yet always accessible through their passions and longings.

In the title story, he relates the tale of a woman who has returned to her birthplace in Italy to attend a family wedding with her Canadian lover. Ian, the lover, marvels at the beauty of the countryside, at the warmth of the Italian relatives, at how they can discourse learnedly about angels and how Julia, the woman in his life, can so easily emote within this context. At the wedding they attend, Ian realizes that Julia’s “homecoming” is a return of the heart, and his “pagan” imagined marriage to her is the acceptance of this communion. The story ends with a wonderful scene in a cemetery where Julia, Ian and a relative gather with the dead, and suddenly the story swings into an allegory about love, loss, and mortality, all rendered with an effortless and deft touch by the author.

“Less and Less Human” presents two divergent points of view:  a husband who presents a classical view of the world, loving music and art that conveys the profoundest and most enduring of human emotions, juxtaposed with that of his ex-wife, a modern composer, whose vision embraces the seemingly absurd through her empirical scepticism.  At the conclusion, Henderson presents a poignant story of Holocaust survivors hearing the “healing” music of Bach, while his wife denigrates his interpretation, suggesting that modern art is predicated on chaos, not human feelings that could possibly endure.  Here, Henderson’s vision becomes apparent to the reader: someone who bemoans the loss of a humanistic connection that has served as the basis of our culture.  A most powerful warning for our age where we have abdicated spiritual values.

It is hard to pick a favorite story from this excellent collection, but two especially stand out.  “Heaven for Pyromaniacs” (such a wonderful title!) and “The Garden of Earthly Delights”. In the former, the main character, Alison, is travelling from Montreal to the funeral of her mother, who has died in Ontario.  The journey, while physical, is really more a passage through her memories, her past, and her feelings about family and loss.  Henderson has the ability to move from the mundane recounting of an event to its core meaning.  For instance, he talks about the reality of people who have fled Quebec after the election of the PQ down the 401 forOntario (the “uni-directional migrants”), yet manages to turn this amusing insight into a metaphor for profound loss as in the following passage: “Bodies moved away from each other in this expanding universe of intimate life.  That is what time and death did.”  Despite the seriousness of the theme, this story is replete with subtle humor and wonderful irony.  At the end, as she and her siblings are removing her mother’s belongings from the nursing home where she had died, Henderson has a startlingly laugh-out-loud moment depicting the elderly residents of the home watching in “delight” and amazement since “unless they were dead or very blessed, they did not move out.” Great writing indeed.

The story though that sticks with me the most is “The Garden of Earthly Delights,” perhaps because this is also my favorite painting by Hieronymus Bosch. How Henderson manages to fashion an allegory about the protagonist’s tainted raspberry patch leading to his subsequent illness and the interpretation of the Bosch painting is a marvel to behold.  He writes about a scene in the  painting of a man surrounded by the “permutation of human evil” and another figure glancing at the world “with wistful despair at the pleasure of the tavern he has just forsworn:  a drunken lout pissing against a wall, a tattered roof, a Dutch whore beckoning from a shutter-buckled window…. Perhaps it was the sense of plague that gave so skeletal a quality to the life of those times just as the sense of holocaust has to our own.”  Juxtaposed with this is his own disease from eating the tainted berries that he states is of a “far less spiritual nature.” Again, an encapsulated summary of what has happened to our notion of suffering humanity.

It is at this point that I wan tto conclude with why such writing matters. Henderson’s vision in these stories reflects the loss of value in our post-modern world, a world of quotidian, material concerns and empty longings.  Gone are the grand themes of art from our lives, he suggests, and we are much the poorer for this.

Besides Henderson being a master of style, it is because of such insights and affirmation that this is good writing—one that makes no apologies and is unremitting in its endorsement of the human spirit.

Keith Henderson’s collection The Pagan Nuptials of Julia is a welcome reminder of what good books once were and hopefully may once again become.