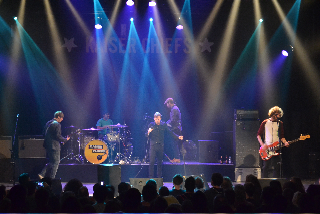 On May 16, the English indie rock band Kaiser Chiefs played the Théatre Corona as part of Pitchfest and they were great! One thing I can say is this band will go far as they are a talented group with lots of flair on stage.

Formed in 2000 as Parva, they renamed themselves in 2003 as the Kaiser Chiefs, having to start from scratch after their drummer left and they found themselves at a point where they needed to think of themselves as a new band and find a drummer that fit the group well. The current band members are Ricky Wilson, Andrew “Whitey” White, Simon Rix, Nick “Peanut” Baines and Vijay Mistry who replaced drummer Nick Hodgson.

I had a short interview with Simon Rix before the show. In answer to my question about what is important now, Simon responded “Staying focused and keeping things together.”

Regarding a question on whether the dynamics of the group changed, if at all when Randy joined The Voice, he responded with “Not really. Only Randy is kind of famous now.”

I wanted to know whether they drew on experiences such as breakups or other emotions when writing their songs and to this Simon replied that “after Nick left we used anger” while writing. When writing songs they shoot ideas and sounds off each other to find what they want and what sounds right. “Writing songs and making a record takes a long time,” he said. So what’s coming next, they don’t really know.

When asking about family, Simon said, “They are very supportive because they know how we love what we do.” He also mentioned that he was inspired by his father who would play the guitar and sing to him as a child before bed and was in bands when he was in high school.