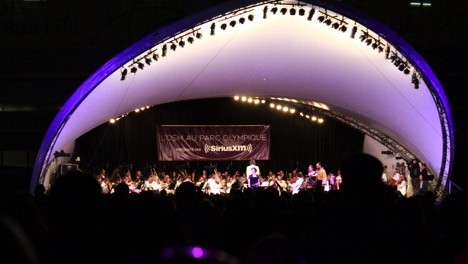 Every summer, the Orchestre symphonique de Montréal (OSM) offers a list of free or small costs concerts to make classical music more accessible to the general public. The fourth classical spree is held during the month of August and takes place at the Esplanade of the Olympic Stadium and other public parks.

In an interview, music director of the OSM Kent Nagano says, “There is a unique atmosphere in Montreal during the summer. Obviously, other cities in the world have festivals, but not like here. Not with this passion and intensity. In the OSM, we wondered a few years ago what we could do add to this festival madness. Because despite the variety, there was nothing for classical music. We decided to get involved and to offer something in the spirit of the programs of the regular season.”

On August 5 the Olympic Park and more specifically Sun Life financial Esplanade was the scene for the opera Carmen by Georges Bizet in a shortened version. The concert was projected onto four giant screens. A total number of 45,000 spectators watched the live concert.

The festival began with a commemorative ceremony of the atomic bombing of Hiroshima (the 70th anniversary this year), followed by the concert. Simultaneously, in Japan, the same ceremony was taking place where thousands of people were gathered. To commemorate the tragedy, viewers were encouraged to send messages of peace on Twitter using #MtlHiroshima.

For those who did not know Carmen, a tragic love story, it was a good discovery. The OSM was accompanied by nine lyric singers, nine dancers of the La Poesia del Flamenco, the dancer and choreographer Shraddha D. Blaney, and the OSM Chorus. The presence and the performance of these interpreters as well as the OSM was no doubt masterful. We witnessed Nagano’s pleasure in leading his musicians and the choir of his Orchestra. He made signs at the singers and others to direct them with unparalleled enthusiasm and a big smile.

And it is in this context that I have a few complaints.

Indeed, given the large number of spectators and the size of the site, the presence of other screens and speakers would have been highly appreciated. In fact, for latecomers, like me, as powerful as the voices were, it wasn’t enough to be heard from afar. In addition, a delay in the transmission of the events in stage by the cameras was notable. The focal point was too often the Orchestra, while scenes crucial to the understanding of the action were taking place on the stage.

In conclusion, it was a magical musical moment and a challenge. It basically was successful for the OSM as the first concert of Nagano’s “virée classique.” I hope for better logistics organization in the coming years and a comeback to other great beloved classics.