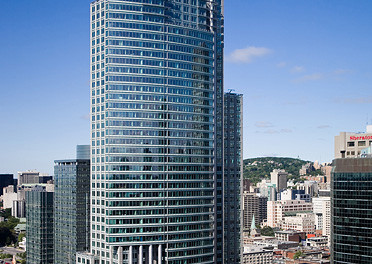 Known to many as the IBM-Marathon building after its original tenants, 1250 René-Lévesque was built by architects Kohn Pederson Fox with input from Pasquin St-Jean and Associates. Built in 1992, this building stands out as the second tallest building on the Montreal skyline at 226 m (surpassed only by—you guessed it—1000 de la Gauchetière, located only a few blocks down boulevard René-Lévesque) and a grand total of 47 floors offering areas mainly office leasing. Acting for many years as the border between the commercial area and the residential area of downtown prior to the construction of other buildings to its west, 1250 René-Lévesque has a multitude of styles to accommodate its different audiences, its west “residential” side composed of granite and its east “commerce” side made of curved glass.

The good-hearted rivalry between building giants 1250 René-Lévesque and 1000 de la Gauchetière has bounced back and forth among the years. 1250 René-Lévesque notably got a Prix orange the same year 1000 de la Gauchetière got its Prix citron from interest group Sauvons Montréal. It has garnered other awards such as the Building of the Year by BOMA Canada and another excellence award by the Ordre des architects du Québec.

1250 René-Lévesque, like most major buildings in the immediate area, are part of the Underground City, which means wherever one goes, one is always connected to the downtown core, including places such as the the STL terminuses, the Eaton Centre, and Place Ville-Marie. 1250 René-Lévesque can also be accessed directly from Bonaventure metro station.

Real estate giant Oxford Properties is currently the owner of 1250 René-Lévesque at the time of writing.

Visit Montreal’s second tallest building at none other than 1250 René-Lévesque.