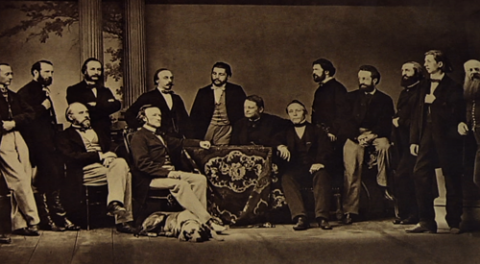 The documentary Wagner’s Jews explores the life and career of composer Richard Wagner. Filmed in Germany, Italy, and Switzerland the documentary deals with the man behind the myth and provides viewers with a look at the personal life and controversial beliefs of the famous composer. Produced, written, and directed by Hilan Warshaw, Wagner’s Jews also serves to highlight the emotionally heated conflict between art and political ideology. Even in 2014 Richard Wagner is a divisive figure in the world of classical music. The composer was well known for being outspoken and publicly voicing his anti-Semitic beliefs. Despite this, however, it’s surprising to discover the renowned composer had a long history of working with and being financially supported by various Jewish musicians and patrons.

Richard Wagner was born in 1813 and lived until 1883. Despite the fact that he didn’t live to see World War II and the horrors of the Holocaust his work is indelibly linked to Adolph Hitler and the Nazi movement. In the documentary viewers are made aware that the wounds inflicted by Wagner’s anti-Semitic writings and beliefs have remained fresh in terms of how he and his music are perceived by the Jewish community. Indeed the controversy over his music isn’t simply due to the hateful opinions the composer expressed during his lifetime. Jewish opposition to his music is also fueled by the fact that Hitler was a great admirer of his music and the Nazis believed Wagner was the embodied ideal German values.

Wagner’s Jews illustrates why Richard Wagner has remained a controversial and polarizing figure in the world of classical music. The film allows viewers to go behind the scenes in Tel Aviv when a Wagner concert is scheduled to be performed for the first time. The concert announcement is met with strong cries of objection and anger from the general public as well as various members of the local arts community. A great many Israelis vow that Wagner’s music must never be performed in Israel. For these individuals his work symbolizes anti-Semitism and the beliefs of the Nazi regime.

Wagner’s Jews traces the history of the composer and documents his surprising involvement with a wide variety of Jewish supporters, fans, and co-workers. The film reveals that when he was young Wagner felt like an outsider and was even rumored to have Jewish roots. Later on in his life the German composer freely expressed his belief that Judaism was “an evil” that needed to be “cleansed out”. Wagner even participated in the failed 1848 revolution and was exiled from his homeland for many years. At this time the composer voiced his intentions to commit “acts of artistic terrorism”.

Because of its subject matter Wagner’s Jews is sure to appeal to fans of classical music. The documentary serves to shed light on the personal and professional evolution of the musical artist while providing a strong historical perspective on the events of his life. For anyone unfamiliar with the controversy surrounding the German composer the film effectively illustrates why he was and still is such an emotionally divisive figure.

Perhaps the greatest strength of Wagner’s Jews is that it raises questions regarding the relationship between art and politics. The documentary asks if Wagner’s work should be judged solely on its artistic merit or are his musical creations powerful symbols of his racist views. Should the composer’s work be forever marred by his connection to the Nazi philosophy? The issue is an emotional one and thus the film offers no easy answers.

I was born in Halifax, Nova Scotia but have called Montreal home since 1999. I received degrees from Mount Saint Vincent University & Concordia University. I enjoy writing, watching movies, & most of all spending time with my 4 cats. Contact: Facebook | Twitter | More Posts