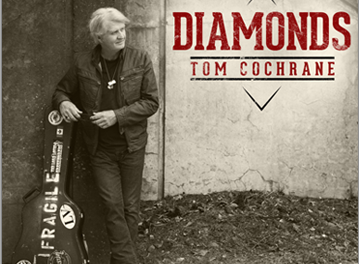 It’s been eight years since Tom Cochrane released an album, but from his end, the 61-year-old Canadian icon expressed incredulity at that notion. “It hasn’t been eight. Come on! You’re putting me on!” he answered laughing when I mentioned it to him. Of course, his view of the album cycle is different than it is for most fans. “There’s that time in-between where we released it, and we toured, you know… just don’t make me feel too old!”

Despite the span of time, he never had any doubt that there would be another one. “I don’t remember really thinking that ‘this was it’. My attitude is: you don’t do something just to do it. I enjoy calling myself a professional [musician]. I feel very privileged and blessed to be a professional but I don’t feel this entitles you to just put out mediocre work. And if you put out stuff all the time, you can’t help ending up compromising things. So the time had to be right. It’s like the bird flying south; you get that instinct, that urge, and it’s time to do it.”

That’s not to say that the writing process is an easy one. “You feel that ache, that itch,” he says, “And all of a sudden the songs start to pour. Not that it comes easy, it’s actually quite painful, but it’s a good kind of pain. Jean-Paul Sartre would understand that pain. It’s a very existentialist kind of pain. So this record had to be done. It takes work, but the inspiration has to be there. There needs to be a spiritual undercurrent to realize the work.”

That analogy of the migrating bird is pretty accurate in this case, as the Canadian singer incorporated a lot of Southern influences on his latest album, appropriately called Take it Home. “I spend a great deal of time in Austin, Texas, as I have a place down there, and it’s a real vital city. We went to the Continental Club one night, and the swing dancers were going like crazy, the band was just cooking, and that kind of inspired the final song of the album, ‘Back in the Game’. I wanted to pay homage to many of my early southern influences like JJ Cale, The Band, Ry Cooder and Captain Beefheart. Their ghosts are ever-present on the record,” Tom explains. “We made an intentional effort to make this a really organic-feeling record. Probably even more organic than some of the stuff we made in the late ’80s as Red Rider. We really went out of our way to make it feel live and honest.”

A constant theme running throughout this new album is time, whether in appreciation of a moment (‘Sunday Afternoon Hang’), the passage of time (‘When the Light Starts to Fade’), or a look at the future (‘Another Year’). I asked Tom if that was an intentional arc to an album that ends with a boisterous declaration that he is ‘Back in the Game’.

“Yeah, it really was, and I wanted people to pick up on it. A lot of the album deals with that mythical journey of the rock ’n roll hobo, the bard, the artist; it’s kind of a life that doesn’t exist anymore” he says. “You always have to move, you always have to go to a different place. That’s inevitable in life. That which is in motion needs to stay in motion. It’s a spiritual and educational journey through life that you go through as a human being, and that people can relate to. This album starts with ‘Can’t Stay Here’ where I sing ‘I may not make it to Nashville but I can’t stay here,’ and that ties with ‘Back in the Game’, doesn’t it?”

“And then to diverge from that, songs like ‘The Ones That I’ve Known’ are talking specifically about that struggle for freedom: freedom in the civil rights movement with Rosa Parks, and freedom from a disease, not just for himself but everybody else, with Terry Fox who was one of our greatest heroes. So it still explores a lot of topics about that journey through time, different ideas through different stories. I’m glad you picked up on that.”

When you’ve racked up as many achievements in a career spanning four decades as Cochrane has (he is a recipient of the Order of Canada, a Canadian Music Hall of Fame inductee, and has won eight Juno awards as well as numerous other honours), success is measured differently than by album sales, even though the singer is no stranger to those either. “You wonder whether people will pick up on these things. In this day and age, we’re such a singles-oriented world that it’s almost as if we have collective ADD. So you hope that people will buy into the fact that you’re making an album, and listen to the whole thing. That’s what I hope to get out of it: that people will pay attention to the message, appreciate the thought that went behind it, as well as the joy that’s on this record.”

The singer is also itching to take these songs to the stage. “From a pragmatic point of view, we wanted to make a record where I could pretty quickly get to playing these songs live without too much radio exposure, and things of that nature. And I think there are a number of songs that are going to be a riot to play live!”

In contrast to the upbeat nature that is predominant on the album, some of the material is pretty dark, like the song ‘Pink Time’, which tells the story of a long haul truck driver and his wife who has Alzheimer’s. “But those songs are offset by the joyful songs; hopefully there’s a good balance of celebration and introspection.”

He is of course very proud of this new album, which I suggested to him might very well be his best yet. “It would have to be right up there. I mean, I love ‘Neruda’; it’s a suite of music and the songs hang together, but I think this one is a pretty strong effort.”

Two of the songs were actually written around the time of his last album ‘No Stranger’. “‘Diamonds’ is a song I wrote for my buddy Bill Bell and Tara MacLean.” Tom explains. “When they split up, Tara ended up in a group called ‘Shaye’, and this song was about their breakup. And Bill co-produced this record with me and he said “Tom, have you thought about doing ‘Diamonds’?” And I said “Nah, I wrote it for you guys, for Tara to sing, and then she never did the song.”

Luckily, Bell was able to convince Tom to try it, and it turned out to be the lead single from the album. Another song dating back to the ‘No Stranger’ era is ‘A Prayer for Hope’. “I wrote it around that time after a trip to Kenya on an HIV initiative, but that never made the last record. And then there are three or four songs that didn’t make this album that we might spring on people down the line; we’ll see what happens with those. Maybe you’ll ask me about those in six years! (laughs)”

Once the album comes out, the singer will embark on an extensive Canadian tour backed by a band that includes his Red Rider mates, where he hopes to be able to play some of these new songs, while still offering the classics the people expect to hear. “We’ve got a good problem, and the problem is that there are about 10-12 songs that are non-negotiable. How could we leave out ‘Life is a Highway’ or ‘White Hot’ or ‘Lunatic Fringe’? We keep these in the set so it kind of limits the number of new ones we can play, but I really want to get 5-6 new ones in there. I think ‘Back in the Game’ is pretty live as it is, so it’ll be in. We’ll mix it up and see how it comes out.”

On whether or not he ever gets tired of playing ‘Life is a Highway’, his answer was clear: “No. And I think Mick Jagger said it the best: “I like playing the hits ‘cause I like seeing people get off.” When we play ‘Life is a Highway’, the energy alone that you get back makes it a different sort of ride, excuse the pun. The song really pulls people together and creates a lot of joy and energy. It’s hard not to like doing a song like that.”

Some songs also keep their place in the set by staying relevant even years after they were written. “‘Lunatic Fringe’ has moody moments, but unfortunately, in light of what happened in Paris and what keeps happening in our world, it’s as relevant now as when I wrote it back 30 years ago. So that song is also important to play, for different reasons.”

When I pointed out that the initial leg of the tour crisscrosses Canada but skips Montreal, he shared my puzzlement at the situation. “I asked the same question! I wanna play Montreal, and why isn’t Montreal in this run?” he said. “We get more requests from Montreal than almost anywhere else. But I was told this is the initial run and we’re gonna come back. So hopefully we’ll be back maybe later this spring or early summer. Some of the best shows in my life have been in Montreal. We played the show for the 350th anniversary of the city, and that was one of the best shows I’d ever played! The crowd was 75,000, it was wonderful. Celine, the late great Joe Cocker, the Neville Brothers all sang at that show. I just find Montreal to be a very artistically intuitive city, and I know Jim Cuddy and a lot of us feel the same way. It just has that ‘thing’, you know. So we’ll be back.”

‘Take It Home” comes out on February 10 2015 through Universal Music Canada. The first single ‘Diamonds’ is out now and tour dates are available at http://www.tomcochrane.com.