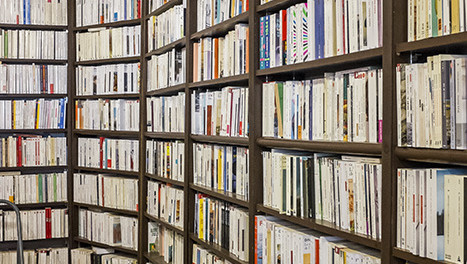 ​“A writer who is serious and economical can store away small fragments of ideas and events and conversations, and even facial expressions and mannerisms, and use them all someday. It is my belief, for instance, that somewhere in the back of my own mind is a kind of storeroom where there are hundreds of small items I am going to need someday, and when I need them I will remember them. I am also sure that this storeroom must look a good deal like my desk drawers, which also contain all kinds of things I am sure I am going to need someday, such as a pair of roller skates and the curls cut off thee children and an old compact and what I think is the inside lining for my heavy winter boots.” (“How I Write”)

Known by the general public as the author of the novel that would become Robert Wise’s 1963 film “The Haunting” (The Haunting of Hill House, 1959), Shirley Jackson (1916-1965) is also known to undergraduate English students as the author of the short story “The Lottery” (1948) and the novel We Have Always Lived in the Castle (1962). Though the collection of her horror stories have influenced the minds of writers and film makers from Stephen King to Stanley Kubrick, she had a myriad of other roles. She was a wicked humourist, writing a collection of short stories about married life and her children (aptly titled Life Among the Savages), and, this might be a tougher sell, a feminist as well.

In this new anthology of unpublished and uncollected stories, we have glimpses of other texts that Jackson wrote towards the beginning of her writing career, in the 1940s. In a collection of stories ranging from the eerie to the humorous to the mundane, we see a plethora of characters, and a glimpse into the future as she contemplates the process of writing Hill House. A young woman travels back to her childhood neighbourhood to correct a wrong done in high school. We hear a woman’s thoughts as she is berated for agreeing to marry a man who they believe isn’t the right one for her. A man tries to remember the first name of his wife. From musings on Dr. Seuss, tween girls, and fan mail that asks her for her divine guidance on behalf of a mysterious Brotherhood. The best part of the book I found was her autobiographical writings, hesitant about revealing too much and yet revealing much through her frank style that makes you feel almost like an acquaintance. Her text “How I Write”, quoted above, is particularly of note from which to glean writing tips but also to get an idea of her character and writing style.

This is a very good collection, but probably only for people who are already invested in Jackson’s other writings. Recommended.