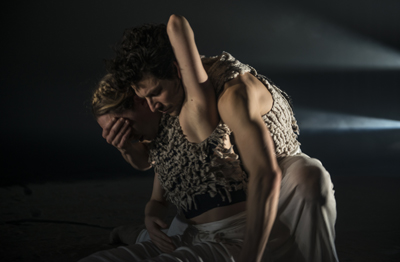 The 15th Edition of the Festival Quartiers Danses was launched Thursday September 7th at the Cinquième Salle of Place des Arts. The evening was spectacular and made the festival’s goal of sharing the universal language of movement and dance and bringing the art form closer to audiences very evident. The evening opened up with speeches by the various organizers who explained the history and growth of the festival over the years and how they are working hard to share dance with all the neighbourhoods of Montreal and in many different venues. The festival’s programming includes indoor and exterior performance spaces as well as workshops, talks, video projections and exhibits that all help bring this mandate to life. The opening evening provided a taste of all the incredible artists who will be featured in the festival during the next two weeks with a piece titled The Man who Traveled Nowhere in Time by Kyra Jean Green and El Vientre del Animal by Andre Peña.

Kyra Jean Green’s piece had hints of a narrative amidst its very gestural language. The dancers moved together in fits and starts to different constructions they created with their bodies, constructions that resembled the paper creations that hung over the stage. The piece was divided into multiple sections that were rhythmed by music written and arranged by Canadian musician Sheenah Ko. The combination of the style of movement, the hanging décor and the cold color lights made it almost feel as if we were transported onto a lunar landscape.

Andre Peña’s piece left a much different impression. Her piece incorporated very primal and earthly movements as the dancers bounced around a dark lit stage to music that included all sorts of sounds from nature. The choice of costumes that included white baggy pants and pieces of fur and plants made the connection to the earth and pre-historic human history very obvious.

Overall, the opening night celebrated works by upcoming Montreal based choreographers and definitely seemed to have excited the audience about what is to come in the rest of the festival. Personally I look forward to the projection of the short dance films on Wednesday September 13th at the Cinéma Beaubien and Jane Mappin’s If Only for a Short Time + Ils m’ont dit at la Salle Bourgie on September 17th. For the entire programming and for tickets visit: http://quartiersdanses.com/