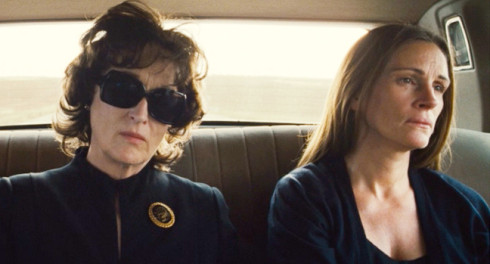 August: Osage County is a tale of lies and truths, secrets buried under silence and resilience, a movie that will make you laugh between tears. This picture lets us take a look inside the dysfunctional household of the Weston family brought back together under the same roof after a tragic event. You might think that a funeral can bring a family closer, but this family reunion takes a dangerous turn when people start spitting out truths to each other when deep buried secrets resurface.

In the opening scene we see a distraught Beverly Weston (Sam Shepard) talking about his wife Violet (Meryl Streep), who deals with her oral cancer by popping pills for breakfast, lunch and dinner. While he’s speaking to the caretaker he’s about to hire, we see Violet waking up and gorging down pills, slowly making her way downstairs, a cigarette in hand.

Meryl Streep offers a spectacular portrayal of Violet Weston, a woman who feels secluded from the world and abandoned by her three daughters, dealing with her sickness by over-consuming prescribed drugs. Violet walks in, stumbling, in the study of her husband, creating an uncomfortable atmosphere, as she doesn’t bother to filter her thoughts. Streep is almost unrecognizable, with short gray hair, a crazed look on her face and hysterical laugh. Her portrayal of a bipolar, drug-addicted, cancer bearing and grief stricken woman is beyond words. It’s almost scary as to how real her portrayal seems. This movie will be sure to score her another set of nominations but Meryl isn’t the only one whose name will be in the nominations. Julia Roberts offers an amazing portrayal of Barbara Weston, the eldest of the Weston sisters, who has unresolved issues with her mother. Roberts and Streep have strong on screen presences, complementing each other beautifully. The quarrelling scenes between Barbara and Violet make an impression.

Violet’s mantra of telling the truth even if it hurts adds to this dysfunctional family’s dynamic. Cruel humor and insults fly around the table of the post-funeral dinner conducted in the Weston family home, which turns ugly as soon as Violet starts giving her two cents about everyone. Nothing seems to get past this woman as she instinctively catches onto Barbara’s martial problems and the involvement of her daughter Ivy with her first cousin. This isn’t a simple storyline. The film contains revelations that will make you twist and turn. While the opening scene makes you believe that Violet Weston is about to die and that the whole plot story will revolve around her death, in fact it’s the other way around.

The casting of the film is great. Every actor seems to fit his or her character perfectly. One thing that especially impressed me was the pick for Chris Cooper and Benedict Cumberbatch to play father and son. If you didn’t know that they were brought together for the movie you could of sincerely thought they were related; Benedict can pass off as Chris Cooper’s son anytime. This father and son dynamic holds quite a revelation near the end of the movie.

The movie itself is darker from what the trailer implies. It seems as they’ve gathered up all the wit and sarcasm from the movie and put it in the trailer. This movie is categorized as a dark comedy but it mostly seemed dark.