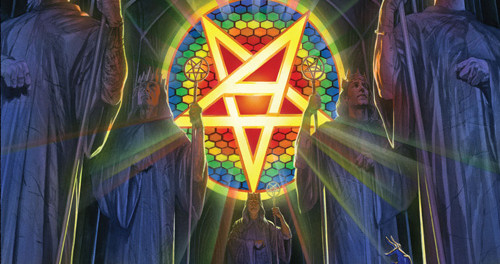 Thrash metal veterans Anthrax are back with a new studio album following up “Worship Music”, their reunion record with singer Joey Belladonna. Continuing in the same vein, “For All Kings” sees the band embracing the style of their early thrash metal classics, delivering crushing riffs throughout the 11 songs on the record. Right from the first track, “You Gotta Believe”, it’s clear that the band is inspired and imbued with a renewed energy. “Monster in the End” slows down the pace a little but maintains a heavy vibe, setting the scene for the title track. “For All Kings” is a track that is very dear to Charlie Benante (who wrote most of the music on the record); as he explained to me, the song is about “how in this day and age we need to look up to some more important people than some of the crap that people look up to.” The cover, by renowned comic artist Alex Ross, sets up the band as some of those kings while re-using some of the religious imagery of “Worship Music”.

“Breathing Lightning” taps a more commercial vibe with its catchy chorus, but remains true to the band’s identity; I wouldn’t be surprised if it became a concert staple. The rest of the album yields more thrash scorchers like the first single “Evil Twin” or the closer “Zero Tolerance”, and a song like “Defend Avenge” would have fit very well on the great “We’ve Come For You All”, their last album with John Bush on vocals.

There’s a certain maturity that’s colouring the songs on this record; to me classic Anthrax had that exuberance and naiveté of youth that made them stand apart from most metal bands who never smiled and played every song with a heap of gravitas. It’s somewhat missing in modern Anthrax, but “For All Kings” is probably the album that comes the closest to that vibe since probably 1990’s “Persistence of Time”. The band is all fired up, Joey Belladonna’s voice is still strong and new guitarist Jon Donais shines with blistering leads. Scott Ian is still a master of hyper riffing and the rhythm section of Frank Bello and Charlie Benante lays down the thunderous groove that drives the band.

Benante wrote most of the album while recovering from a wrist operation, and his frustration at being sidelined is quite obvious in the aggressive nature of the music. The previous album had a difficult birth as the band went through many lineup changes at the time, but this one had an easier genesis, and it shows. The band’s not trying to be something else; they’re being themselves and embracing it.

I liked “Worship Music”, but “For All Kings” is better, and it keeps growing on me. But if there’s one criticism I have to make, it’s that I would have liked more hooks. I know purists will say that metal shouldn’t be concerned with hooks, but the best Anthrax material like “Indians”, “I Am the Law” or “Madhouse” all had great choruses that crowds everywhere still sing along to. Still, “For All Kings” is a good return to form for a band who’ll be celebrating its 35th anniversary this year. Anthrax is back!

Check out the interview Jean-Frederic Vachon did with Charlie Benante.