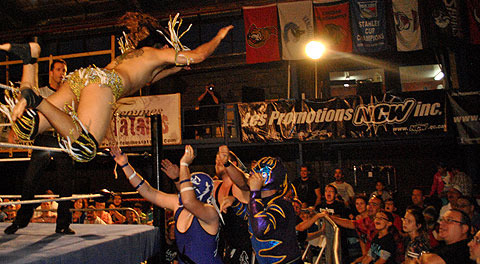 Professional wrestling: it has always held a strange yet welcome place in my heart. I have always been somewhat captivated by its theatrics and over-the-top drama, so when I was asked to cover Northern Championship Wrestling, Montreal’s  own professional wrestling club’s season opener (who knew we had one?), I very happily obliged.

I had absolutely no idea what to expect as I sat waiting on a bench for my date for the evening. I had never heard of Northern Championship Wrestling (NCW), even though it was started in Quebec in 1986. Would this NCW be as entertaining as the wrestling I remembered watching on television as a child? Would I feel the same as I had then?  I felt excited and nervous, foreshadowing my sentiments for the evening ahead. When we arrived at the Centre de Bruxelles, we were met with a line-up of very enlivened people. As I watched the woman in front of me down the last of her RedBull, I overheard the man behind me proudly saying, “I have never missed an event in five years!” It was easy to see that this crowd was incredibly pumped to be at the NCW’s first event of the season.

Inside the small arena, the excitement was tangible. I could not help but grin when I saw the looks on spectators’ faces as they decided where to sit or whose shirt to buy. The music was loud, the children were hyper and the arena was filling up fast. I met with the lovely and very helpful Rachel (Mademoiselle Rachelle) who lead me to my seat and made sure I knew she was available for questions throughout the night, except when she would be accompanying a wrestler, Jesse Champagne, to the ring.

As I settled in, my own excitement began to mount. I wanted to see some damned wrestling! Before I knew it, the announcer was announcing the first match, which consisted of five men of all different sizes and statures, and it was on. They jumped from the ropes, flipping through the air, using one another as landing pads. They ran around the ring with a what seemed to be an inexhaustible amount of energy. It was how I had remembered it and it was live.

Over the course of the night, there were nine (yes, NINE) matches, each more dramatic and entertaining than the last. The crowd made the matches all the more amazing. I have never seen a crowd at any sporting event so excited and so involved with the event. Adults and children alike heckled, cheered and confronted the fighters as they fought to be champion. One man had made a sign for almost every match and proudly boasted them each time a wrestler entered the ring. About halfway through the night, I thought to myself, I love this crowd. As a newcomer, especially, being around such excitement made the evening that much more enjoyable.

The final fight of the night was definitely the most intense. The wrestlers, Pat Guénette and Darkko, were amazing. It was the longest match of the night as well as the most dramatic and involved. The two men of startlingly different statures, Darkko was about a foot taller than Guénette,  somehow escaped the confines of the ring and began moving through the crowd and all around the arena, smashing each other on the backs with tables and chairs and whatever else was in their path. The people working the event even seemed surprised as they yelled, “Move! Get out of the way!” to the excited and stunned crowd. In the end, it was Pat Guénette who was the victor and he did so graciously. As he accepted the belt, he thanked Darkko for always being a great competitor and the two hugged. These men who had moments before been literally smashing tables and chairs over each other’s backs were friends. It was then that I realized that NCW is truly a family affair.

As my evening with NCW was coming to a close, I thought to myself that it was a pretty damn good way to spend a Saturday night. Three-and-a-half hours of almost nonstop action and I was tuckered out. As I was leaving the arena, I quickly spoke to Rachel. When asked what she would like people to know about NCW, she smiled widely and answered, “The crowd is very involved. We know that people come to have fun. If we’re doing our thing and everyone is quiet, it’s not fun for us. We are here for them.”

Check out NCW’s upcoming events here! You will not be disappointed. The next event Mesures de Guerre takes place on September 20 at Centre Bruxelles (10 015 Avenue de Bruxelles) Montréal Nord at 7 p.m. $12.