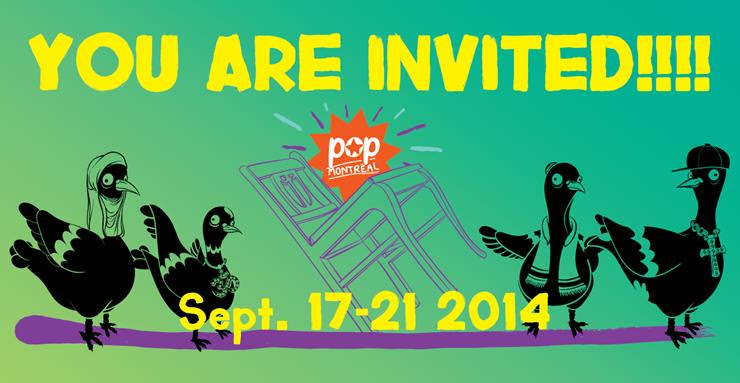 I love POP Montreal. Okay, sure, I love Jazz Fest and Osheaga too — all the big names touring come to town, tear it up, and then move on. But, by and large, these are commercial events with almost prohibitive ticket prices. Ticket holders pay for the best and see the best.

POP Montreal, in comparison, is mostly composed of bands I’ve never heard of and ticket prices are generally around $12 a show. There are some big names and major shows, but mostly, Pop Montreal is about the discovery process, local music, and small venues. I love to go to a show to see a single band and find four openers that join my roster of amazing. Perfect example: Braids opened for Pick-A-Piper in their first Montreal performance. Every year, I find four, five, six, ten new bands that make me swoon. It happens accidentally, often when I don’t see the band I wanted to see.

The list, though, is daunting, with more bands than are possible to see. So, this is my list of things I’ll be sure to catch.

For whatever reason, I’m hoping to plant my ass at one venue and stay through the acts, though the ones I want to see come later in the evening. Things start with Toronto feminist comedienne Natalie Norman, and other performers are Ami Dang and I’m hoping that the east coast will deliver something interesting with Moncton/Montreal performer Uaxyaca. The real reason I’m hitting up Casa is to see these two:

I’ve been jonesing to see violinist and composter Ari Swan who was here with with the one man band festival. I know almost nothing about her except that she’s managed to collaborate with a few other performers whose names will simply make your jaw drop: Little Scream, Folly and the Hunter, Ingrid Wissink, Corinna Rose. She’s gotta have something in the tank.

I know I’ve been in Montreal a long time when I make this Montreal performer a must-see. Malcolm Fraser started solo in these parts around 2000 and morphed into a full performing band. Last time I saw the World Provider, I wrote a note to myself: cool, subversive punk edged dance music. I find it hard to pigeonhole something this eclectic. Shows, at least previously, were highly theatrical with costumes and props. It’ll be good to see where the World Provider is at on the eve of a new record.

Leonard Cohen’s son. He took a bit of a hiatus and is back with acoustic guitar driven songs that sound like Canadian anthems of the grassier, folkier sort. Opening for his act at 6 p.m. is indie folk duo from Australia Luluc. This show is “sold out,” but they may or may not actually have relevance for pass holders. As this show is rather early, I’m not that worried.

Various Acts and the indecision startrs

Assuming that Cohen finishes around 10, my mood will dictate where I go next. More folk music continues at Petit Campus with Paul Cargnello at 10:30 and the Lakes of Canada at 11:30. The line up at La Vitrola is a creative mash-up with trippy, experimental stuff. On tap there are Petra Glynt at 10 p.m., Ken Park at 11 p.m., Mathematique at midnight, and Phedre at 1 a.m. However, I’m most likely to haul myself up to Il Motore where I can see what former Pony Up singer Lisa J. Smith duo with Ben McCarthy is like. The two put together likable electronica as Pale Eyes (10 p.m. – 10:40 p.m.). More melodic Culture Reject with its intriguing, syncopated music 11 p.m. – 11:40 p.m. The experimental rock sounds of the Archery Guild. I’m loving their jammy song Savage Youth, which is a good sign. The night closes with Technical Kidman, a band that graces many Montreal stages with its high energy, high intensity percussive music.

This is when I start to feel very torn.

Timber Timbre is one of my favorite bands, and I have to decide if I will plan my evening around this show. I know nothing of openers Tasseomancy, except that Timber Timbre’s Taylor Kirk and Simon Trottier were involved in co-producing their album. I’m going to ignore the fact that seeing Timber Timbre means I don’t see any of the following: Mozart’s Sister, the Rural Alberta Advantage, Wake Island, Lydia Ainsworth, Maica Mia, okay enough….

The sad death of Adam Yauch happened halfway through this mind-bending project of this Solid Steel/Ninja Tune DJ team to re-create Paul’s Boutique. Each DJ took 1/3 of the original album and mixed it. I am on the edge of my ass to find out how this will go down!

I am not the sort of person to sprint from venue to venue, in part because bands don’t usually perform, despite the best efforts, at their allotted times. Anyone who has been to Pop Montreal and tried to follow a schedule pretty quickly realizes that this is impossible. However, if there is one night that I might break that rule, it’s Saturday night. Thank you for the Bixi bikes!

I’m glad that Sarah is playing. She’s a violinist, mostly known from the Arcade Fire, but also plays with the Luyas and the Bell Orchestre. She released her solo album in 2013 and I’m intrigued by what she’ll bring out in a show — more experimental, more melodic, more classical, more rock? I have no idea. I just know it will be good.

Okay, they’re described as porno-rock. Does that mean lots of wah wah pedals and funk?

Some of the choices to mull over:

10 p.m. and 11 p.m. Orkestra Kriminal and Glam Gam at Cabaret Cleopatra $10: First, there’s a yiddish orchestra klezmer thing with Orkestar Kriminal. How cool is that? Then there’s a Glam Gam show (that would be burlesque/cabaret/theatre) and their performances are always go well beyond the imagination, assuming one has a very dirty mind.

10 p.m. Choice #2: Richard Reed Parry and the Warhol Dervish performing “Music for Heart and Breath”. The chamber music orchestra Warhol Dervish is generally intriguing and has a gift for evoking emotion without being stuffy. As for Richard Reed Parry, most people know him from Arcade Fire, or even the Bell Orchestre. The two have come together before to perform Music for Heart and Breath, but I’ve never had the chance to see it myself.

10 p.m. Choice #3: Katie Moore at The Ukrainian Federation. Katie is roots and country at its best. She’s got a lovely voice, and an unmatchable grace onstage. I’ve never been disappointed by her shows ever.

10 p.m. Choice #4: Li’l Andy at Nouveau Palais. It’s almost cruel that he should play at the same time as Katie. He used to open for her shows (or was it the other way around???) Anyway, roots and Americana of a most awesome kind!

I could just stay at Divan Orange all night too. I mean look at this glorious line-up that includes a fantastic serving plate of local dance acts! These guys get the booty shaking and bring the good time, each and every one. Also, The Lovely Feathers are a rare treat.

11 p.m. Why? at La Vitrola. $18. Of course, one of my favorite American bands Why? is performing at La Vitrola. A rare treat, fronted by Yoni Wolf who manages to bring his mathematical, angular touch to every band he graces.

I think I’m flipping a coin.

This one was easy for me. Bonobo. Not with his full band, either. This is Bonobo the DJ. As much as I like him as a musician, and I return to his albums from Animal Magic to the North Borders constantly for my life soundtrack, I love him as a DJ. He brings the same transcendent, emotive build to his DJing that he brings to his own work. I fear this show may be a madhouse, though. Popularity is a bitch. Y U so good Simon Green?

(Okay, okay, just because I’m biased, I should let you know that Sunday night has killer acts ALL OVER THE CITY. There are also Stars at 8 p.m. in Studio Brekglass, Suzanne Vega at 9 p.m. at the Ukraniane Federation, the Unicorns at Metropolis along with Shonen Knife at 10:30 p.m. )

POP Montreal takes place from September 17-21 at venues around the city.