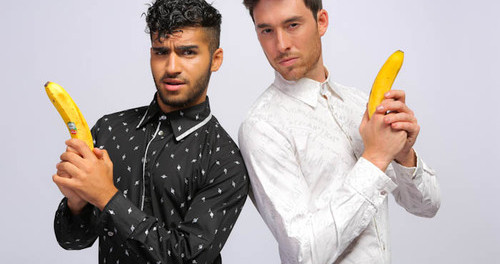 Montreal continues to define fashion for the rest of the world, and in this case some of the most influential people in the world – geeks. With its new Kickstarter campaign, Variable Fashion, run by Jon Gulick and Aliki Maragis, launches a line of dress shirts with geeky themes, or as they put it “professional clothes for geeky men.” Instead of polka dots, there are planets. Instead of pinstripes, lines of code. Another has calculus equations. I talked to company founder and owner Jon Gulick about the reason for designing and decorating clothing for geeks.

“I’m a geek,” Gulick says. It’s hard to believe that the bundle of energy with the big smile at the table opposite me is “geeky.” “I was a circus acrobat my entire life and I opened a circus company in 2010.” I’m still not convinced he’s geeky. Then he shows me some of the things he designed for that circus: ipad controlled LED bras programmed using Processing and reliant d on XB transmitters, a teddy bear suit that worked using Arudino and touch pads on the fingers with 17 different variations. He learned to program while touring. Okay, I’m more convinced.

Gluick went from running a circus to getting an MBA. “I was getting more bussinessy,” he says. But at business school, he found the unofficial dress code a change from what he was used to. “All my friends are doing splits and artsy, and you go to business school and it’s more cookie cutter. Everyone looks a certain way. You have to wear a suit. They all wear the same black suit and have to look professional.” However, he was all to aware that people still wanted to express themselves. “They wore silly socks or dumb ties. Pink ties.”

Realizing that people wanted to be themselves and that members of the tech industry were the sort of people who went to venture capital meetings he wanted to create “professional looking shirts that were subtle but intended for people like me, geeky people who end up in business.” He mentions a friend who wore a ripped t-shirt while going into Google headquarters. “How do you express yourself in a business setting? For artsy, geeky people, how are you going to feel comfortable wearing a suit?”

The circus background proved useful. Costumers and sewers, in particular a former collaborator and fashion designer, Wilber Tellez, made sample shirts with silkscreened prints. Each print has its own story.

Gulick points to the one with math equations on it. “This one was for one of our friends doing his PhD for math. He had this really pretty writing. We took a photo of his homework for his thesis,” Gulick says. “I wear this under a suit. It’s subtle, but people noticed it. They’ll look at it and notice, especially engineers. They notice the signs and equations for spheres and cubes.”

With a bit of experience programming myself, I’m drawn to the pinstriped code. “It’s coding from the NSA website,” Gulick says. “In high school all the cool kids had their table. But with this, if you can’t read code you won’t get it. It’s an inside joke.”

The other two designs are a variation on polka dots, turned into planets, and a circuit board.

For the kickstarter, the goal is to produce the planet shirt and the math shirt first, and if the campaign reaches its stretch goal, to produce the other two. The kickstarter campaign is crucial both in getting the new company’s name out to the world and in raising funds to produce the requisite minimum of shirts. “We’re hoping someone will come in and buy a bunch of them,” says Gulick. “If we succeed in the Kickstarter, it means 150 people liked our shirts. There’s a market there.” The manufacturing of the shirts is done in Canada. “We’re printing in Chabonel, the sewing is in Toronto.”

True to the spirit of Geekdom, Gulick and his team put up an Instructable blog on how they made the shirts. They document the process in their own blog. The team is also keen to solicit feedback about the shirts. “What kind of geek are you? What would you want on a shirt?” he says. “Geeks like that feedback loop.” When a woman wrote to complain that the company only identified men as geeks, Gulick responded kindly to ask what she would want and a fruitful discussion ensued. “She made great suggestions with stretch fabric,” he says.

Ultimately, though, the shirts respond to a need that Gulick recognized. “When I did the business plan, we went into all the different designer bands and who their targets are. Prada … luxury. Koors wanted jet setting preppy people. I’m not luxurious, I’m not a jet setting yuppie. I’m quirky and funny, so where’s my quirky funny brand for me?” he says. “There are a lot of tech people. Our brand is geeky professional. You can still be professional, geeky, and awesome all at the same time. That’s who we are.”

Support Variable Fashion’s Kickstarter campaign HERE. $98 gets you the planet or calculus equation shirt, and for $130 you get a matching bow tie thrown in. The Kickstarter campaign ends September 12 at 12:52 p.m. You can also let them know what you think at [email protected]