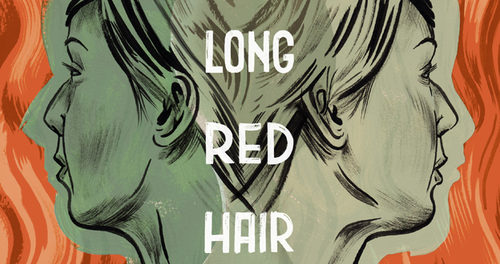 The FBDM (Festival Bande Dessiné de Montréal) invited many well-known local, national, and international artists to the city to share their work. Among them are Meags Fitzgerald, who is giving a workshop on ambidextrous drawing on Sunday. Fitzgerald is known for her autobiographical/historical graphic novels as well as her illustration work. Her most recent, Long Red Hair, looks at the sexual development of a young woman who does’t identify with the heterosexual norm. She doesn’t exactly identify with the homosexual norm either. What she does like is long red hair. I asked her a number of questions about her graphic memoir and more generally about her career.

Rachel Levine (RL): Have you always been a cartoonist? Was it something you started at a young age or much older?

Meags Fitzgerald (MF): I was constantly drawing as a kid and I made comics for fun all the time. In University, I studied drawing at a very conceptual program, but ultimately once out of school I was interesting in making comics because of their accessibility. Books have the ability to reach wide audiences, much more so than gallery exhibitions that are fixed to a time and place. Gradually I felt like graphic novels were a better vehicle for my ideas than the fine art world.

RL: Do you have a preferred medium for drawing — watercolor, marker, pen, all of the above?

MF: I don’t really have a favourite medium but there are some that I’m better/ more practiced at than others. My go-to medium is brush and ink. When I’m traveling I use brush pens; the best ones are made in Japan, which are hard to find in stores so I buy them in bulk online a couple times a year.

RL: Why did you learn to draw ambidextrously? Can you pay attention to both hands at once, or one at a time.

MF: I taught myself to be able to write and draw with both hands in 2011 for two reasons: firstly, I had an old Wacom tablet for drawing digitally and the pen badly cramped my hand. I could only draw for a few hours at a time, that’s when I first wished that I could switch between my hands at will. Secondly, I had just moved to Halifax and was unemployed and didn’t have much of a social life, so I had loads of free time to train my non-dominant hand. It was a funny, oddly satisfying challenge. I can control each of my hands separately and simultaneously while drawing but I only have one pair of eyes so splitting my focus between them is tricky.

RL: What was it like to publish a second graphic novel that was based on your own life? Did you find it challenging to address issues of sexuality? Were you uncomfortable to have people read it and think how it represents your own life?

MF: While writing Long Red Hair, I was at times conflicted about how much to share and where to draw the line. Furthermore, it’s difficult to condense nuanced and complicated experiences into just a few pages, and so you’re always negotiating how you’d like to your tell story. It does make me a little uncomfortable to share my personal experiences but I’m okay with it because like a song, the audience doesn’t listen to it and wonder about the musician’s life, they interpret the lyrics as they relate to their own life. By being honest and at times vulnerable with my readers, I’m better able to help them with whatever they might be going through.

RL: How do your other artistic pursuits — circus arts and improv — contribute to your work as a graphic novelist?

MF: They keep me happy. When I was a kid I dreamed of a job where I drew all day but too much of anything is unhealthy. Performing improv regularly ensures that I socialize with other humans from time to time and training with the circus ensures I use my whole body a few times a week. If I didn’t have these two major side-pursuits I would enjoy making comics and illustrating a lot less than I do. They’re such solitary and stationary activities that I need other creative outlets for some balance.

RL: Do you have any advice to people who want to write a graphic novel of their own? What wisdom can you share from the experience?

MF: Making a graphic novel is no small feat. Here’s my best list of realistic advice:

1. Start with a shorter story. Make a few comics that are just a few pages long. Experiment with pacing, formatting and landing your narrative arc.

2. Re-read your favourite graphic novels and pick out the narrative tools that could also serve your story.

3. Figure out in practical terms how you’re going to make this thing. Spend a few hours every night after you finish your day job? Are you eligible for arts funding that could cover your living expenses?

5. Know that you will put hundreds or thousands of hours into this project and you will likely never be compensated for it. If you’re lucky you’ll make some money off your book but it’ll be nowhere close to earning minimum wage for all those hours.

6. Make a timeline and set a goal for when you’d like to finish, but knowing that you’ll miss that deadline secretly set a “real” deadline for three months later.

7. Find someone else who’s making book and write/ draw alongside them, be each other’s cheerleaders.

8. Tell everyone you love that you’ll be a hermit for a while and that you’ll be incapable of having conversation about anything but your book subject for the following months. Say you’re sorry in advance.

9. If you’ve got a big deadline and you’re single and it’s winter, you can save time by only showering once a week. No one but you will know.

10. Draw until your fingers hurt and then do some of those popular self-care exercises. Then keep drawing.

11. Remember everyone who helped you along the way, this may include your sister who let you live on her couch for free for the first six months of drawing your first book, and then thank all those people in the acknowledgements section.

12. Weigh yourself at least once a month to make sure you are not radically losing or gaining weight, caused by either crippling stress or an exclusive frozen pizza diet.

13. Digitally lay out your book until your eyeballs are burning, then do some of those popular self-care exercises. Then go back to your monitor.

14. Ignore your family during the winter holidays. When everyone else goes skiing, stay in to underdraw your next chapter. Feel at the time that this is the right thing to do.

15. Put time aside at the end of your timeline to redraw the first quarter of your book, because by the end your artwork will have tightened up so much that the early stuff won’t cut it anymore.

16. Put together a submission package for publishers, knowing though that most publishers don’t take submissions anymore. Instead have an artist friend who is already published by your dream publisher, buy that friend lunch and ask if they’ll read your submission package. If they like it, maybe they’ll pass it on to their publisher.

17. Know that writing and drawing your graphic novel was only the first half of the work. If you ever want anyone to read your book, morph into a publicist, lose all shame and don’t shut up about your book on social media.

18. Cross your fingers a whole bunch.

19. Stack up all your pages of original art and feel a deep satisfaction knowing that you just accomplished one of the most personally important things you could ever do.

20. Do some of those self-care things.