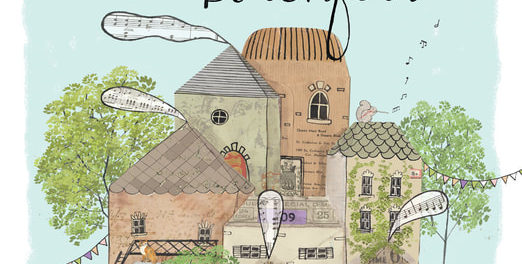 NDG Porchfest (aka Balconfête) is a  chance to rock on the porch from Rue Connaught to the Decarie is on. Chair optional, amp preferred. Over 100 bands will be playing on the porches, patios, and front lawns of NDG properties along with a few street corners, this weekend. This annual event is one of the most fun ways to experience the best of Montreal by allowing local talent to occupy a residential neighbourhood. Every hour, new musical acts and new porches “open” for business and the crowd wanders to the next. Performances are free, but one of Porchfest’s goals is to raise money for a local community centre. This year, funds are being collected for the Walkley Centre, a community recreation centre and youth organization.

Many bands participating are just happy to be part of the event and support a good cause. Barry Goodz, the guitarist of the band The Blue Monkey Project, says his band is happy to participate. “This will be Blue Monkey Project’s third Porchfest. It’s great to be part of an event that lets the community experience local talent. NDG is full of amazing and interesting musicians, and we’re proud to be associated with that. It’s also nice to get a chance to help raise money for worthy local causes. Kudos to the organizers and volunteers for making this happen and doing such a great job year after year.”

Rachelle Eves of the David Eves Band says that part of the appeal is hearing others play. “We just think the whole concept of Porchfest is amazing. We love the idea of checking out all the talented musicians in the area and being a part of it all. We also like the fact that money is being raised for children’s choirs. Great event! We are really looking forward to it.”

Part of the appeal is playing in the house of someone you know or perhaps don’t. Adam Reider of Pope Joan says, “We’re so stoked to play Porchfest in NDG this year. It’s such great event that really brings out the community. It’s really cool to see an entire section of the city open and excited to accept music in the streets. It’s a celebration of the art our neighbours do and it’s so welcoming to have it on each other’s porches. It’s as close to being invited into somebody’s home with actually just walking in. We’re really proud to be able to rock out for such an inclusive event and then walk around after to catch some other acts too. It’s gonna be a great day!”

Porchfest begins at 11 a.m. on Saturday (May 19) in Griouard/NDG Park with Hanorah, who made it to the quarter finals on La Voix 5. Here at the opener, you can get your Porchfest swag, like t-shirts and posters.

From there, the wandering begins until 6 p.m. both days. Caribou Stew, Eleuthera, Sarah Segal-Lazar, Iguana on Fire, Martin Goyette, The Jimmyriggers are some of the repeat performers on Saturday. Also keep an eye out for 16 year old Emmy Aronovitch, and Sunday’s lineup, also starting at 11, includes Voodoo Jazz, Sunfields, Friends with Benefits, the Community Klezmer Orkestra, and the PopTones Vocal Ensemble among many others. There are bands performing that come from places afar (Hamilton) as well as those that never normally leave their own living rooms.

While the sun is shining, and even if it isn’t, this event is one of the best grass-roots initiatives in the city.

For details about Porchfest performers and schedule, check HERE.