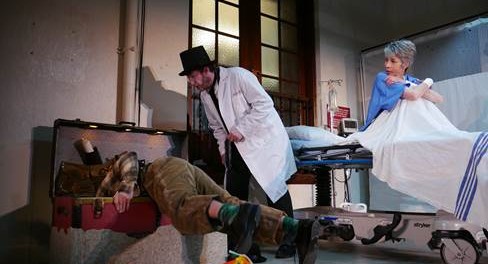 Progress! (written by Alyson Grant, directed by Guy Sprung) succeeds completely as a site specific production. Just the drive up to the parking lot and walk down the dark path to the former nurses’ lounge is worth the trip. Guy Sprung makes fabulous use of a delightful wainscoted room and then performs magic with the performance area. The sound effects by Nikita U were so astonishing that many audience members looked up and around to see whether the wrecking crews had arrived to take down what was left of the Royal Victoria Hospital. On the doors to the entrance was a clear message in French and English that all medical procedures were now being executed at the Super Hospital.

The two clowns who mingled with the audience were ostensibly the ghosts of the first two patients ever treated at this hospital. Daniel Brochu was flawless as Number Two; his comic timing and excellent delivery are worth the trip down the stony path to the site. Peter Farbridge had a great deal of charm as the obstreperous second banana and was equally convincing as the wooer of the heroine. The three were mostly confined to what was the last patient room at the Royal Vic.
Jennifer Morehouse gave a terrific performance as the heroine’s mother and various other personae. Howard Rosenstein can read the phone book and make you laugh and /or cry. He was moving as the disaffected father and husband, and he was touching as a second-rate actor who tried to stand his ground.

The general concept of this play was interesting, but the actual writing failed to have a through line that was believable. Could a patient who had recently attempted suicide interact with two clowns and, as a result, survive. The causes for the attempted suicide were really anemic, and the actor did not really convey the angst that would have driven an educated woman to take her own life. The balance between pathos and comedy was too uneven. It never really came to any kind of cathartic moment and it left everyone a bit puzzled at the easy ending.

The play could have used some more dramaturgy and it might yet have reached a level of emotional truth for which it was striving. As it stands it was neither a comedy nor a tragedy, and couldn’t really succeed as a “warmity”. The ultimate heroine is the grand old Royal Victoria and the ending of the play made everyone hope that some magnificent use might be made of those memorable stones on the side of Mont Royal.