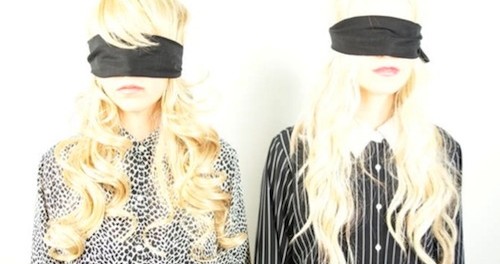 The Casket Girls, composed of sisters Phaedra and Elsa Greene and Ryan Graveface from Graveface Records, form an unusual pairing of electronic sounds and enchanting lyrics. What started out with Phaedra and Elsa playing on Autoharp turned into a beautiful collaboration with Ryan Graveface, which in turn created entrancing melodies with a shoegaze feel. Listening to their songs, you can almost feel transported into another world. Their upcoming album, True Love Kills the Fairy Tale is proof of the dream-like state you may fall in once you listen to it. I asked Phaedra Green and Ryan Graveface a few questions about True Love Kills the Fairy Tale as well as about the Casket Girls origins.

Nina Chabel (NC): Have you always been playing music together? I read that you were discovered by Ryan Graveface singing under a tree in Savannah, and that’s how the Casket Girls came to be. Or was one sister more involved in music than the other? When did you guys start playing together as a duo?

Phaedra Greene (PG): Our interest in music started at the same time after listening a million times to a Bach record we found in the attic when we were children.  It was the only record we had so we would listen to it over and over and make up our own songs to sing over the classical music.  Later in life someone gave us an Autoharp, which is the only instrument that we played until we met Ryan.  Since then, we’ve been learning bass, guitar and keyboards.  We haven’t tried to play drums yet, but we really want to soon.

NC: How did you come up with the name “The Casket Girls” (Casket girls were women from France brought to the Louisiana colonies to get married)?

PG: Ryan had had the name swimming around in his head for a long time before he met us.

NC: For this record I read that you had a very unusual song writing process, where the lyrics seemed to be pouring from your mind. How exactly does the song writing process work? Any rituals or special setting before the right words come to mind? Where do you get your inspiration for the lyrics? Were you reading any particular books, watching any particular movies before writing the lyrics for this record?

PG: Our process involves recording our very first listen to the musical landscapes that Ryan sends us to capture our initial instincts without them being filtered too much through our brains.  We are devoted to spending a fair amount of time trying to connect with the collective unconscious, erasing the lines between the waking and dream world.  We had received a new batch of songs from Ryan and ended up writing the record in one night.  Weirdly, we don’t really remember the night.  We just recorded a bunch of ideas and sent them back to Ryan.  It was really weird and kind of awesome when we went to re-record the demos to listen to what we had done and feel the resonation of our unconscious words being spoken back to us through the structures of the waking world.  Before we wrote the record we had been pouring over our dream journals, trying to make some sense of it all.  But, there’s something about every piece of music that Ryan sends us that makes us somehow able to step outside of our normal fear of judgments and expectations and freely allow ourselves to stream consciousness and bring to attention parts of ourselves that we were never aware of.

NC: What are your favorite songs from the album? Which ones are you more emotionally attached to and why?

PG: I am really connected to “Perfect Little Soul.”  When I hear it, it tells such big story it overwhelms my heart.  I would have to say “Stone and Rock” for Elsa because every time she listens to it she cries.  I’ve caught her several times.

NC: Which artists do you look up to? Which songs do you turn to for inspiration?

PG: A contemporary artist that we’re really into right now is Janelle Monae. We were watching this video every day prior to recording.

NC: How is this new album going to be different from your first record, “Sleepwalking”? I noticed that in “True Love Kills the Fairy Tale” you have heavier shoegaze elements present as well as more synth than in your previous record. What culminated to this artistic decision?

Ryan Graveface (RG): I used all the same stuff — various old & broken Casio keyboards and the same Farfisa.  I think perhaps I just understand how to use them better?  It’s also a much more personal record so I feel like the melodies rip harder.  Not rip as in rock but rip as in hurt your heart.  As this project continues I learn more and more about myself which is leading to more interesting songwriting… I think!

NC: What pushed you to choose “True Love Kills the Fairy Tale” as the title track of the album? Do these words have any particular meaning to you?

PG: No one knows the truth, therefore what is the meaning of a fairy tale?  We ask ourselves this all of the time.

NC: Listening to your songs, you can definitely feel a supernatural vibe going on, an air of mystique, almost witch-like. Where are they coming from? Is anyone in the band especially interested in the supernatural?

PG: Who isn’t interested in the supernatural?  Show me that person and I will weep for them.

PG: 2013 was really special because we got to see one of our favorite artists work in person, Frida Kahlo at the High Museum in Atlanta. And we’re looking forward to the second season of Orange Is the New Black.  Also, we couldn’t be more excited for our February/ March tour!!!

The Casket Girls with the Stargazer Lilies and Dreamend and the This Many Boyfriends Club play Casa del Popolo (4873 St. Laurent) on February 21. $10. 8:30