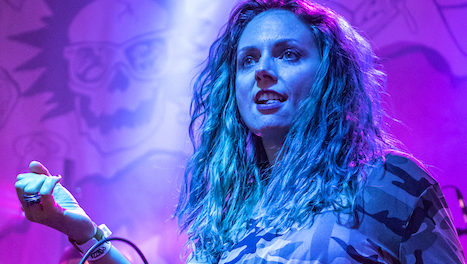 It was this passing Friday for the 8th edition of Montreal’s very own Pouzza Fest that feminist hardcore punk band War on Women took the stage. Whether it’s about gun violence in America, female genital mutilation or, on a more personal scale, toxic relationships and internalized sexism, no branch of gendered violence is left unaddressed. Am I starting off too strong here? I hope not, for these state of affairs do not temporarily cease to affect the live of countless women, LGBT folks and men alike, and War on Women sure aren’t backing down any time soon.

Back with their second LP, Capture the Flag, War on Women explore a more alt-rock sound in songs like Silence is the Gift and Pleasure from the Beast while still reaffirming their hardcore punk roots. YDTMHTL, the first single off the album, has become my personnal manifesto of non-compliance. It’s urgent riffage and commanding message, advocating freedom of personnal choice, is a straight up “piss off” to anyone who thinks they have anything to say about the person you want to be.

I had a chance to meet up with the front woman, Shawna Potter, to talk Pouzza Fest, the album, and feminist theory.

Lyse Ross (LR) : Everyone is super excited that you’re here and I think that panel served as an inspiration for a lot of people in that room, thank you for being with us. Now this is your first Pouzza Fest, and it kind of feels like it’s a long time overdue. How did you get involved this year?

Shawna Potter (SP) : They’d asked us to play several years in a row and we could never make it. This was really the first year we were available and like… I feel bad! We’ve always wanted to.

LR : Pouzza has always put women forward. And you talked about it during the panel, about encouraging bands that include women from a bottom-up perspective. But I think about big festivals that eat up a lot of small shows. Do you think it’s also festival holders responsibility to promote women?

SP : Well I think it’s everyone’s responsibility. Everyone is in a position of authority sometimes and has the possibility to put their foot down or decide what’s gonna fly. And you don’t have to change everything. But everyone can do something, take control or your part of the world so you can say you’re doing something.

LR : You’ve worked with J. Robbins on this record, who has produced notorious alt-rock acts like Faraquet and Dismemberment Plan. How did that come together?

SP : Brooks and I run an amp repair shop in Baltimore. And that’s in the same building as J. Robbins studio. So we share a space with J and we’ve been friends for a long time now. And Brooks he’s in another band with J. It just made sense, he’s an amazing engineer, and he’s super easy to work with. It was not a hard decision at all.

LR : And yet your lyrics are still to the point and very blatant. And having read the workbook for the album, I definitely want to get into that. YDTMHTL is, as it’s mentioned in the workbook, ‘’dedicated to all 14 year olds, past and present.’’ So let me ask the super cheesy question, what would you tell your 14 year old self today about gender bias and sexism?

SP : One, that song, is me telling my 14 year old self all those things. And at the time, I was struggling with being a naturally, independent, capable young woman, and starting to realize that the world, really, doesn’t like women.

SP : They don’t! And my eyes were starting to be opened. I was starting to experience little bits of sexism that maybe I hadn’t experienced before and being aware. So it’s a weird time for anyone, but to add the untangling of oppression is just another struggle on top of that.

LR : You talk about internalized sexism in your song Pleasure from the Beast. What do you think can be done by and for girls to claim themselves and their sexuality in this kind of framework that includes them but is also a lot bigger than them?

SP : I think a very comprehensive sex-ed in schools is vital. Everyone needs to know about every body. When you do end up with someone, they know about you enough and you feel comfortable telling them what you want, and they won’t scoff, or say, ‘’Well, what do you mean?’’ and assume you can’t orgasm. Like that’s nuts.

LR : In Dick Pics you talk about a situation that happened at a show that you decided to deflect with humour, which makes me want to ask, do you have any dick pic stories or examples of situations that you just laughed off.How do you navigate between those two attitudes, the ‘’I’m pissed, I’m telling you off’’ or ‘’Whatever, I can’t even…’’?

SP : I don’t really have any dick pic stories I feel comfortable sharing, BUT, how you do choose to respond to everyday sexism as a victim, it’s valid. Sometimes I have to laugh; that’s the only way to get through it. Sometimes I need to get it out. The point is to get it out, seek solidarity and know that you’re not crazy. You’re responding normally to an abnormal situation. And it’s valid.

LR : The whole essence of what you’re about, and with Capture the Flag, is how are you going to promote change around you. So I just want to know, for this last one, how are you doing that now? What’s next for you? And, if you want to talk about the workbook and why that was important, that’d be great.

SP : You know, for the workbook…I just never thought about doing that before! I just thought it would be really cool to have your band taught in universities. That’s just fucking rad! And if I can make that easy for someone to do and they want to and they want to teach about these broader issues through music, I would have loved that. And I love it now as a person in the band that they’re using to do that. I just wanted to make it easy on teachers. They work really hard so I just want to give them a staring point like ‘’Hey, try this.’’

LR : Give them something to bite on. Thank you so much Shawna, and have a great show.

You can listen to YDTMHTL through this LINK:

For more info on War on Women, click HERE

For info about next year’s Pouzza Festival, keep an eye out HERE.