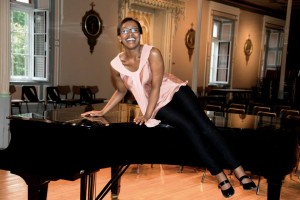 Sandrine Murengerantwali is one of the lucky ones. Born with a rare heart defect in a war-torn country without the means to provide the medical attention she needed, her father was able to get her to Kenya for the operation that would allow her not just to live, but to live to her full potential. And now, at age 18, she wants to give that opportunity to other, less fortunate children in her home country of Rwanda.

Sandrine and her family moved to Canada ten years ago. Since then she has been pursuing her passion: music. A student at Marianopolis College, Sandrine has won many awards and performs regularly. But perhaps her greatest achievement to date is the Foundation Vivo Cuore, a charity she founded and runs specifically to raise money to send to Rwanda so that children with Ventricular Septal Defect (VSD) can receive the same operation that saved Sandrine’s life when she was four years old.

Currently in Rwanda, 2000 children are awaiting surgery. Ten thousand children suffer from VSD and haven’t even been diagnosed. Approximately 100 children receive the operation in Rwanda each year, thanks to Teamheart cardiologists. Each year approximately 20 are sent to Sudan, Egypt and Israel for the surgery. But, sadly, 15 to 20 children are in danger of dying each week because they don’t receive the necessary medical attention.

In order to raise money for Vivo Cuore Sandrine will be performing at Pollock Hall at McGill University on February 7 at 5:00pm. The program will feature works by Liszt, Bach, Scriabin, and Chopin, among others. Friend and fellow talented musician Lucas Perus will make a guest appearance as well. And 100% of the proceeds will go to Rwanda to help pay for the much-needed surgeries. So if you’re looking for an escape from the snow, and you want to treat yourself to a night of gorgeous music while helping to give children something that most of us take for granted — the chance to live—get your ticket now. It’s a guaranteed win-win situation.

Sandrine Murengerantwali will play at Pollock Hall (555 Sherbrooke St. West) on Saturday February 7 at 5pm. Tickets are $20 for students, $30 for others, and can be purchased at the door or online.