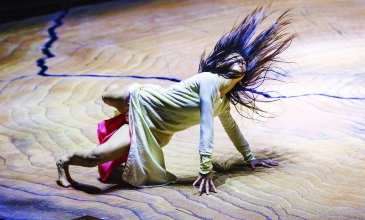 “Until the lions have their own historians, the history of the hunt will always glorify the hunter.” In Akram Khan’s new work, Until the Lions, he explores the tension between hunter and hunted, predator and prey, intimacy and rejection, power and submission. He asks, and answers, what happens when ownership and control of one’s body and life are compromised? To what lengths would the hunted go to seek revenge, and what are the repercussions for the hunter, and humanity?

Khan takes as his starting point the Mahabharata, the ancient, epic Sanskrit poem recounting the wars, loves, lives, philosophies, and fates of Indian dynasties vying for the throne. This is a tale Khan has held close to his heart since childhood. But for this production, he turns to a retelling by Indian writer Karthika Nair, who re-imagines the events of the original through the eyes of minor characters, particularly women, and especially the princess Amba, abducted on her wedding day by Bheeshma and offered as a bride to his brother.

So Until the Lions is the ultimate revenge story, an ancient Indian Kill Bill prototype, if you will. Although Amba eventually regains her freedom, her life and honour are permanently destroyed. She is rejected by her family and her fiancé, and finally turns to the gods for help. The god Shiva blesses her, and promises that in the next life she will be born a man and exact her revenge by destroying Bheeshma. She throws herself on a funeral pyre and dies shouting, “for Bheeshma’s destruction!”

But it is not just a revenge story. Throughout the work Khan explores the physical expression and the very notion of gender, through the shape-shifting figure of Amba, who transforms her body from female to male. He uses his signature combination of Indian Kathak—classical Indian dance and storytelling—and contemporary dance to convey the primal intensity of the emotions inherent in the drama: pain, rejection, anger, elation. Movements are primal, bendy, and repetitive, interspersed with the twirling and grace of Indian Kathak. One of the highlights for me was the angry but intimate coupling of Khan with one of the two female dancers; even in the moments when their bodies became one, a destructive force pushed them apart.

Khan and his collaborators succeed in transcending the specificity of the primal emotions being explored, revealing their universality and their continuing relevance in our time. Enacted on the cross-section of a tree trunk, we have the impression that the characters are small beings upon the earth, acting and re-enacting ageless and eternal dramas, and justifying everything by appealing to the gods (represented here by a talking head on a stick). We are slaves to our emotions, and will turn to whatever god necessary to justify our actions.

A co-production of Danse Danse and the Tohu, Montreal’s centre for the circus arts and North America’s only circular performance venue, Khan, along with Visual Designer Tim Yip (of Crouching Tiger Hidden Dragon fame), creates an other-worldly atmosphere, made more immediate through the live musicians and singers that surround the stage providing an Indian-inflected soundtrack. Definitely worth checking out.