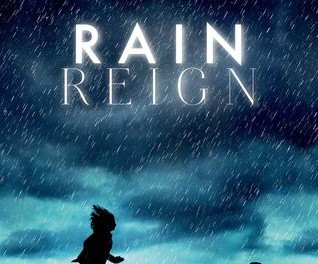 “Somewhere a family named Henderson is missing Rain. If they miss her as much as I missed her when she was lost, then they want her badly. And she belongs to them. I don’t know when the shelter will start their search for the Hendersons, but I need to start mine now.

I have to find the Hendersons and give Rain back.”

This is a story about a girl and her dog. Or, rather a girl and a dog. But it is her dog, at least for a while, until it goes missing during a hurricane, which forces our protagonist, Rose, to make tough decisions in her life. It is also a story about Rose’s father, Wesley Howard; Rose’s uncle, Weldon; and Rose’s classmates. But it is first and foremost about Rose and Rain, the titular dog.

Rose is a twelve year old girl with high functioning autism. She is obsessed with homonyms, something her classmates don’t understand. The best part of the novel is that the autism part is not front and centre, though it is dealt with sensitivity and respect: through Martin’s strong writing, it is clear that Rose is slightly “different” from her classmates through her need of a special teacher beside her during class, her homonyms fascination, making lists, and her choice of words and how she forms complex sentences despite her age, but it isn’t spelt out explicitly. Through first-person narration, it allows Rose to tell her story without her condition screamed out front and centre.

Secondary characters in the story were also well developed and relatable. Rose’s father is incapable of dealing with Rose, being a single father, and he isn’t painted with broad brushstrokes: he is a three dimensional character; Rose’s uncle might just be the person Rose needs in her life long term. While I hoped for more psychological depth in the novel, it is probably not at the expected reading level. A good story for young readers to young adults is worthwhile reading.