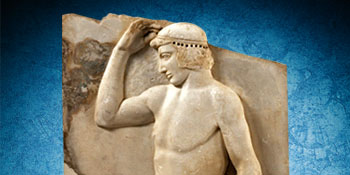 Greek crowning himself. The Greeks from Agamemnon to Alexander the Great
Tweet

My memory may be faulty, but it seems that every year, Pointe à Callière has managed to include an exhibit on ancient cultures. Recent ones include exhibitions on the Etruscans and the Gauls. This year, the ancient Greeks get their due with The Greeks – Agamemnon to Alexander the Great. Of the three ancient European exhibits, this one is easily the best with rare items coming from the museums of Greece for four months to our archaeology museum before shuffling off to the US.

The exhibition begins in the period of the Early Bronze Age and pauses at several critical periods and ends with some Alexander portraits in stone and bronze. Over 500 pieces are on display, some of which will be familiar from art history texts. A number of assemblages from graves are featured, including that of a priestess and the remains of a funeral pyre complete with remnants of the unburnt skeleton.

Funerary mask. The Greeks From Agamemnon to Alexander the Great. Pointe a Calliere.

The exhibit is well laid out, with a few cases representing each period. Without large architectural components, this method allows the visitor to focus on these smaller masterpieces and appreciate them. Further, the ability to approach these pieces outside of the often crowded major museums they come from (Athens National Museum in particular) allows for an intimacy and invites contemplation. Looking at Mycenean statues so that it is possible to see the way the clay hair is molded down the back in a long, snake-like braid feels special. It’s delightful to contemplate the beautiful golden wreath of delicate flowers and leaves from Queen Mada’s possessions.

queen mada’s wreath. The Greeks from Agamemnon to Alexander the Great

Sadly “the face of Agamemnon” from the grave circles of Mycenae is a replica, but there are plenty of real masterworks to admire. A marble statue of King Leonidas of 300 fame that comes from Sparta is actually an unknown hoplite. A “frying pan” from the Cyclades depicts a boat on the waves (far larger than I’d ever thought it would be). Gravestones show Athenian men and women shaking hands for the last time with their loved ones. The symbol of Athenian democracy of a young man crowning himself is also in the collection. There are warrior helmets with gold leaf meant to cover eyes and mouths for the afterlife. A few heads from the Parthenon are present, as are a rather fine collection of male and female statues of ordinary men and women. Gods and goddesses as well as mythological heroes appear as well – Athenas, Zeus, Odysseus, Achilles. The final sections on Philip II and Alexander the Great are perhaps of greatest interest in the context of recent excavations of a tomb associated with the Macedonian rulers.

helmet and funeral mask. The greeks from agamemnon to alexander the great.

All in all this exhibit is not to be missed. Some rare pieces are here from museums in Greece that are not always easy to reach (Herakleon, Chania, Naupflio). Give yourself two hours (more if you’re into the material) and allow yourself the time to find the pieces that speak to your heart.

dagger from mycenae. The Greeks from Agamemnon to Alexander the great.

The Greeks – Agamemnon to Alexander the Great is at Pointe à Callière from December 12 to April 26. See website for details HERE.