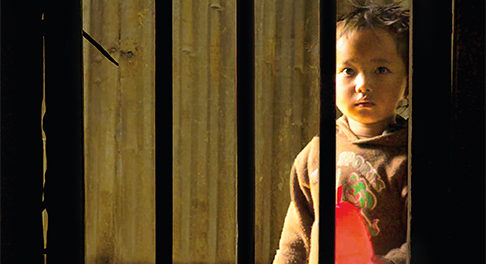 Léa Pool’s powerful new documentary, Double Sentence, focuses on incarcerated mothers, but especially children who are left alone when one of their parents is sentenced. This film examines their fate, but also the importance of allowing the link uniting a child to his mother to exist.

I had the chance to meet Léa Pool at the Gault Hotel in Montreal. She told me about the birth of the project and what she wanted to achieve by making this documentary.

Bélinda Bélice (BB): How was this project born? Why did you focus on incarcerated mothers and especially children?

Léa Pool (LP): There are two triggers. First, I read the article of a woman who gave birth in prison with her hands and feet tied. I thought it was a horrible picture, to give birth as if she was going to run away. I told myself that you cannot be a mother and give birth to a child in these conditions. It had pretty much roused me. The other trigger is a children’s book written by an Ottawa woman named Sylvie Frigon. The book is called Ariane and her secret which is a children’s book about a child whose mother is in prison. I thought it was a great idea because there are so many children who have a parent in prison and no one knows. It’s completely hidden and the children are ostracized. Nobody is interested in these children. The idea of ​​making a children’s book is a great idea, but I could make a film to show that these children exist, show them in the open, don’t hide them so they don’t feel ashamed and see what can be done to make these children have a more normal connection with their mother. Why mothers and not fathers? It is also true for a father, he has the right to see his children. On the other hand, when a mother goes to jail, often she is single parent, she has unstable relationships and when she goes to jail, the father or the person who was there disappears. They are sent either to a foster family or to a grandmother and often the siblings are divided. In poor countries, children are on the streets. When a father goes to jail, the mother is still there so the child suffers less than a total separation from the family bond. It’s the difference for me. It is certain that if the father of a child is in prison, it hurts as well. But the situation is even more dramatic when a mother goes to prison.

BB: We see the father of the child in the chapter on Quebec. Were there other fathers present?

LP: In the situations we saw, it was the only father present. In Nepal, the whole family rejects the woman. In Bolivia, it is often situations of single mothers or unstable situations with their husband or the father is also in prison. There was also Andrea’s father who was present in New York. It happens that fathers are present.

BB: You shot in Bolivia, Nepal, New York and Montreal. How did you choose these different countries?

LP: At first, it was good because it was the four countries that interested me the most. I tried to have other countries, but for one reason or another, it did not work. So I stayed with these four countries. It was my first idea. Nepal because I think that Indira Ranamagar is doing a great job. I had read articles about her. I think she’s an exceptional woman who saved I don’t know how many children, who gave an education while assuring the mother that when she leaves the prison, she will find her child, she does not lose the right to have her child back. I find that it is a total respect for the child and the mother, even if it’s extremely painful. I absolutely wanted to have this woman and Nepalin the film, since it’s a country that I really like. I was attached to this story from the beginning. I also wanted something in Quebec. New York, because in the United States, it’s the country where there are the most people in prison and where there are the most women in prison. I thought it was essential to show it. And Bolivia, because it’s a prison structure very different from the others. It’s like little villages. Children live in prison with their mothers. They leave the prison to go to school and come home afterwards. It’s so different from what we know that I found it interesting to show Bolivia too.

BB: Is it because you are attached to Nepal that you started the documentary with this country?

LP: We ask ourselves the question of order, but it’s because I found that Nepal has a strong history, a story that is still luminous despite the suffering, there is something beautiful and exemplary in what Indira does. I told myself that I did not want to make a wretched movie. I could have taken children on the street, but I don’t even know how I would have found them. I also wanted to show that we can do things. What Indira does, we could do it in any country in the world. She has some help from the government, but she is forced to raise money. In Quebec, interestingly enough, we saw the only child who is really angry at her mother while others tend to magnify their mother. It’s as if she’s sublime. Absence creates an ideal image of the mother that is a bit false. If they lived with their mother, they would probably fight. I loved that little girl who is angry. Between New York and Bolivia, we hesitated a lot to know which country to put before. We found that ending up in a country close to home was a good idea.

BB: Did the children and mothers see the movie?

LP: No, not yet. I don’t know if it’s going to be possible. The prison should accept to show the film. I would like to do that. I would have to ask if I can get subsidies. I don’t know.

BB: You did some research before shooting the film, you talked with people. Was there anything that really surprised you in the children’s testimony or when you went there?

LP: In Bolivia, what surprised me was that children prefer to be with their mothers in prison. There is a woman who says a very strange thing, but true enough and it questions us with our mentalities. She says, “As a child, the house is mother. If mom is in prison, the house is prison.” It is disturbing because we think that no child should live in prison, but at the same time, I am convinced that these children suffer less. As long as the prison is safe, just between women, we see villages where women cook, it’s not very dangerous. It’s not as dark as Orange is the New Black or Unité 9. More dangerous places are prisons where men are in prison with their wives and children. There is this situation in Bolivia when a man goes to prison, he has to pay for his cell. He has no money to pay for the cell and the house outside where the children live so he takes the whole family to prison. That’s more dangerous because there can be terrible abuses. I wouldn’t want any children there. But women among themselves, they protect each other. It’s rare that a woman, a mother, will do something wrong to another child. I don’t really believe that. In any case, no more than outside the prison.

BB: Was it difficult to get the kids talking in front of the camera, to tell their story?

LP: It’s extremely difficult. We have been through organizations that have special ties to mothers, children and penitentiary management. So it made it easy for us to go through the organizations. If we had to go by ourselves to do these meetings, the children and mothers might not have trusted us. With the organizations, they were certain that we were good people who wouldn’t do anything ugly with their stories. The organizations have been very supportive. All children accepted to be a part of the film. When we film in New York, all the mothers who were in prison – and there were a lot of them when we see them for the graduation party – all agreed. There is no woman hidden or blurred, as they say. It’s incredible. They know that it’s still going to help, that a movie like that, it’s going to make that instead of seeing their child every seven years, maybe they’ll see them every six months. It doesn’t look big, but for them, it’s huge.

Teleconferencing by Skype is easy to implement. A room in the prison, a neutral room with a guard who is not far and watching, you could do it once a week. Why don’t we do it? Because we punish them? By punishing mothers, children are punished terribly. That’s why we have the double punishment, because the mother is serving her sentence, but the child is also suffering. The mother even has a double sentence because she is punished for the crime she has committed, but she is punished because she cannot see her child. It’s two things for me. Yes, she committed a crime so it’s normal, you did something wrong, so you go to jail, two or five years depending on the crime. On the other hand, your connection with the child is something else. It shouldn’t be punished the same way. The mother is punished, but also the child. I don’t understand why governments, judges, or lawyers don’t consider it and don’t require that when a woman goes to jail and is a mother, she has rights. In the film, it’s the children who write the rights that are so simple and normal. How come they don’t have these rights?

I cannot solve all the problems, but I wanted to address the question and say, “I never thought about it and here I think about it. If I think about it, where could this film be shown?” It could be shown to UNESCO, to the UN, in law schools, in schools because in every school, there are surely one or two children who have lived or know someone whose parents are in prison. This would start the discussion, allow the children to talk, the same way we now see with stories of sexual assault. Why did women not dare to say that they were attacked? Why do not children dare to say that they have a parent in prison? They didn’t do anything wrong, they don’t have to carry that guilt. If the children could talk about it with their teachers, with their friends, they would not be closed in on themselves, to live their sorrow alone.

The documentary Double Peine is now playing in theatres. To read the review, click here.