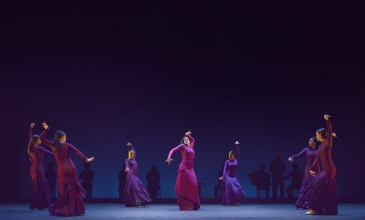 Danse Danse opened its 19th season Thursday evening in Salle Wilfrid-Pelletier with a breathtaking flamenco reimagining of Carmen. The female protagonist in Prosper Merrimée’s 19th-century novella, Carmen is better known as the destructive seductress of Bizet’s opera of the same name. A prototype of the femme fatale, Carmen uses her oozing sexuality to get her way while wreaking havoc on those around her. All curves and danger, Carmen is a stereotype of femininity that corresponds more to male fantasy than female reality—19th-century pornography, if you will, that lingers well into the 21st century.

In Yo, Carmen, modern flamenco choreographer María Pagés challenges this tawdry view of femininity, presenting the “eternal feminine” as something that is constantly changing, not eternal at all, but rather individual and authentic. The title turns out not be an ironic use of the North American “yo,” as in “yo, dude,” but rather the Spanish “I,” as in: “I, Carmen.” For Pagés, we are all Carmen, but Carmen is much more profound than Merrimée and Bizet would have us believe. Carmen is proud, Carmen is strong. She is authentic, passionate, and sensual. She reads, she owns land, even if sometimes she sweeps and dusts. She can be treacherous, she can be hurt. But most of all, man can she dance.

Pagés and her company have mastered the technically virtuosic stomping of the feet, snapping of the fingers, and playing of the castanets. The more traditional segments of the 90-minute show featured the arched backs, undulating arms, and rhythmic poundings of classical flamenco, as well as the evocative guitar playing and the intense, lamenting vocal lines. Live musicians provided real time responsiveness for the dancers; the two female singers often wandered among the dancers, interacting with them, and further enhancing the “feminine” theme of the evening with their mournful wailing.

The more modern, less conventional segments featured the undulating forms of flamenco but without the tapping and snapping. In one segment, women gathered to read from books; in another, they captivated viewers with fans; and in still another, Pagés, dressed all in black, performed an evocative shadow dance. All of the costumes were visually stunning, enhancing the female form and both recalling and commenting on traditional flamenco dress.

Some of the music was, of course, from the famous opera by Bizet. Throughout the show I was wondering what Pagés would do with the famous aria, “L’amour est un oiseau rebelle,” perhaps the most convincing musical expression of female seduction in the operatic repertoire, but one which exploits the conventions that Pagés was trying to explode. Finally, towards the end, the familiar descending line began, but without the sexual rhythmic undertones, and a little slower and more melancholy than it is traditionally played. Onstage were three full-length mirrors, in front of which three dancers gradually donned jewels and layers of clothing, admiring themselves in the mirrors. By the end of the piece, only Pagés was left on stage, dancing while dressing in full, traditional, flamenco costume—but with herself, with her own image. So in her reinterpretation of the tune, the seduction is aimed at oneself, the love affair is with one’s own image; without self-love, nothing meaningful is possible. Cliché? Maybe, but it was nevertheless effective and convincing.

Towards the end Pagés moved to the front of the stage and spoke with the audience in French. In her stentorian voice, she commanded responses, and responded in turn with freer, crasser, more vulgar flamenco moves. She explained a little her vision of women: authentic, not fake; strong; feminist. She projected an imposing figure, seemingly 7-feet tall, strong, proud, free, and driven: someone living her life according to her own rules, which is one aspect of the original Carmen than was well reinterpreted for a 21st century audience.