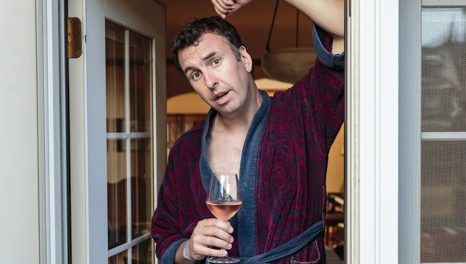 Matt Braunger performs at Montreal Improv as part of Off-JFL on July 25, 26 and 28. (NashCO Photography)
Tweet

Matt Braunger stood me up.

I had arranged for an interview about his upcoming Off-JFL show through his PR agent. When I phoned him up at the agreed-upon date and time, however, all I got was his voicemail. After an embarrassing amount of repeated attempts to contact him (I’m nothing if not tenacious), I gave up and sent off a dejected tweet asking him to reconnect soon. Almost immediately, Braunger wrote me back and apologized for not answering. There was a time zone mix up, Pacific vs. Eastern time – a simple mistake! Apparently, he’s full of ’em. His new stand up show, aptly entitled “Made of Mistakes” hits Montreal Improv starting Monday, July 25th.

A Chicago native and an actor since childhood, you might recognize Braunger from appearances on Mad TV, CONAN, Marvel’s Agent Carter, Comedy Central’s @midnight, Chelsea Lately, The Late Show with David Letterman, The Pete Holmes Show and The Late Late Show with Craig Ferguson. He hosts “The Ding-Donger” podcast on Nerdist and is also a regular at the Upright Citizens Brigade in Los Angeles.

Braunger’s latest hour-long comedy special “Big Dumb Animal” was recently named as a Netflix Best Stand-Up Special. And rightfully so – it’s bloody hilarious. Like, the kind of funny where, after watching it, you immediately research everything the comedian has ever done (Gay of Thrones, ya’ll!) and curse yourself for not knowing about him sooner. The kind of funny where a comedian truly delights you and you can’t believe you get to interview him but then you’re all nervous when you’re calling because you really hope he’s not a dick.

But he isn’t! Matt Braunger is charming and open and genuine. In an industry filled with bravado and posturing, this is a refreshing trait. We discuss his show “Made of Mistakes” which he has been putting together for two years and which was formed as a result of “the screw-ups, dipshit moves, and all-out bad calls on my part.” His blunders are plentiful, from getting a tattoo at 19 on a dare in a pool hall, to his DUI for driving too slow while visiting his parents, to eating a massive amount of magic mushrooms at a picnic and terrifying a pizza delivery driver, Braunger has built a show around some seriously poor life choices.

If you’re familiar with Braunger’s comedy, you’ll know that he is a truly gifted storyteller. A master of accents and nuance, he literally transforms into the characters he’s describing. Says Braunger, “I’ve always been good at re-creating a moment or experience. I’m weird about details. I’ll remember all the lyrics to a song, but I can’t remember my girlfriend’s phone number.”

This complete character embodiment coupled with his cleverly worded and well-crafted narrative makes for one hell of a riveting performance. Braunger’s not on stage shouting jokes at you; he’s talking with you and he captures your attention effortlessly. His comedy persona is dichotomous. Crass, yet poignant. Opinionated, yet self-doubting. He’s relatable, raw and has audiences hanging onto every self-deprecating word.

But “Made of Mistakes” is not a woe is me tale; there is an overlying theme here of using the blunders as building blocks for the person he is today. As he puts it, “I’m not trying to brand myself as king fuck-up. It’s more like I’m trying to embrace my mistakes as part of growing up.”

Speaking of which, Braunger recently moved in with a girlfriend for the first time in his life at the tender age of 41, which fills him with “a new kind of anxiety.” So has he figured it all out yet? “No, but I keep improving my problems.”

I guess that’s all anyone can hope for, really.

Matt Braunger brings his show “Made of Mistakes” to the Montreal Improv On July 25, 26 and 28. Ticket information here.