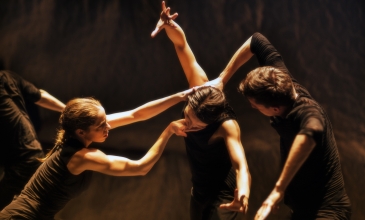 Thanks to Danse Danse, for the first time in 20 years, the Nederlands Dans Theater (NDT) is back in Montreal, with a stellar triple bill line-up featuring two works choreographed by the NDT’s own Sol León and Paul Lightfoot, and one by Vancouver native Crystal Pite. NDT affirmed its place as a leading light in the world of contemporary dance Tuesday evening at Théâtre Maisonneuve, transforming the intensely personal visions of the choreographers into powerfully emotional works of universal reach. Themes of loss, memory, grief, yearning, solitude, connection, transcendence and transformation—in short, what it means to be human—surfaced time and again throughout the evening, communicated through modern movements based on a solid balletic structure.

In the first work, Sehnsucht, León and Lightfoot explore the sense of yearning, nostalgia, and pining implied by the German title (a meaning almost impossible to translate directly into English, but which includes an acknowledgement of the unchangeable inadequacy of reality in relation to that for which one yearns). Against the gorgeous slow movement from Beethoven’s third piano concerto, a lone man slowly unfurls from a crouching position. His slow but determined movements provide a strong counterpoint to a couple housed in a suspended cube set into the backdrop. The couple embody domesticity—she sits slouched at a desk next to a lamp, he moves through the cramped space. In contrast to the stately movements of the lone man outside the box, who alternately strikes muscle-man poses and performs technically virtuosic ballet moves, the couple often emanate the nervous tension that can underlie any mundane scene of domesticity. The man on the outside projects exteriority: his inner feelings are hard to read, and he is, physically, outside the box, outside the inner world of the couple. The couple, on the other hand, project interiority: they are in the house, and their sometimes frenzied and awkward movements belie their interior states. The couple’s world becomes literally topsy turvy when the box rotates by 90 degrees: now the chair is on the wall, but at least the door, which was previously lying on its side, is upright. Eventually, the man in the couple leaves, and joins what appears to be the public world outside. Dancing with a large group of dancers to the third and fourth movements of Beethoven’s fifth symphony, the man is no longer part of the interior world of the couple. What’s a little unclear in this part of the work is if we are to interpret the triumph of Beethoven’s music as ironic; the choreography doesn’t seem to live up to Beethoven’s quintessentially victorious finale, but nor does it seem to subvert or question it. Finally, the man re-enters the box, now to another slow movement (Beethoven’s 4th piano concerto), and, eventually, the woman leaves by the window.

In Crystal Pite’s In the Event, eight dancers move robotically in time-lapse video style, gathered around a man who compulsively touches a dead body, obviously belonging to someone close to him. The sharp, mechanical movements exude grief, a sense that is reinforced when the group then enacts the powerful waves of grief that torment a person who has lost someone dear to them. The bodies wash over each other, often crystallizing and freezing into strange formations, like debris on a beach. An electrical current runs through the individuals, connecting them in the moments of sorrow. The mood is unremittingly bleak, with occasional lapses into terror and the utmost loneliness. The dancers help each other stay upright. But at the end we are confronted with the man from the opening scene, still going through the obsessive-compulsive touching motions, still trying to keep afloat in his grief. The extreme monochromaticism of the work runs the risk of losing the audience in the middle, but in the end we feel like we’ve been sucker-punched by sorrow.

The third piece, Stop Motion, also deals with loss and transformation, but the mood is much gentler than the other two pieces. A giant image of a teenage girl dressed in Victorian black is projected on the right side of the stage. Her ultra-slow-motion movements provide a muted dialogue with the live dancers onstage. For example, partway through the piece the dancers empty flour onto the stage, perhaps representing dust, the ephemeral, or even the ashes of a cremated loved one. As the dancers move in the flour, the floating gusts of powder are echoed in the wisps of fog at the bottom of the projection during that section. Likewise, later in the piece one of the women gathers handfuls of flour and deposits them at the front of the stage, under the projection. At the same time, the girl in the projection is dropping a steady stream of dust or ashes from her hands. The passage of time, the evolution of youth into, eventually, dust, and, finally, the trembling distress of the female dancer as the girl transforms into a bird and takes flight. . . this work speaks to us of the passage of time, the constant need to adjust, to say good bye, to gather up the memories like so many piles of dust.