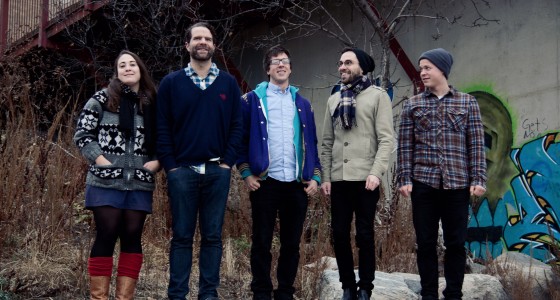 “Winnipeg! Can anything good come from there?”

I wasn’t prepared for the live sound of Boats, or the live effect. I knew them a bit from recordings –guitar, lo-fi electronics, drum machines and Mat Klachefsky’s love it/hate it voice. At their M for Montreal set they were rushed, late, disorganized, and packed onto a stage that barely contained them. And they rocked the fucking house.

Klachefsky was sporting a splint on his left baby finger but that didn’t stop him playing the guitar. I heard later that it limited their set list. Louis Levesque-Coté, bass, vainly tried to welcome the crowd in excellent French. Rory and Ian Ellis play guitar and drums, but as in a lot of indie bands, there’s instrumental multi-tasking and everybody sings. I thought Rory was going to fall off the stage a few times. A loose mic stand insisted on knocking the glockenspiel shut, and his bouncing wasn’t helping. Ian’s solid drumming style is perfectly suited to accenting the transitions that mark the strong song writing. Jody, (the tall one – I don’t think she’s that tall, but let’s just say the contrast is striking), a new addition, plays trumpet and keyboards. A crowd of what I presume were ex-Winnipeggers dominated the floor in front of the stage, clapping along and singing every anthemic chorus. They also danced, one of the signs of a great show.

I’m always a bit wary of glockenspiels. Boats uses the glock and a battery of indie clichés which could be pitfalls in a lesser band –- unison whoa-oh-oh-oh choruses, miniature keyboards, a single tom-tom in the middle of the stage, tambourines — but good song writing trumps clichés every time. Klachefsky has a great ear for structure and drama and the songs build organically. His voice is not as dominant live, but I prefer it with the orgy of sound in a show. It wasn’t coming out in the mix at first, but things evened out as the show progressed. On the albums the voice dominates. It’s a great voice, but the cleanliness of the recordings isolates individual elements on some songs. On stage, the wash of noise and energy takes the edges off the electronics and voice and the effect is more orchestral, which I prefer.

Highlights for me were “O Jumbotron”, “We Got Tables and Chairs”, “Animated GIFs”, and they closed with the single “Getting Worst” off their latest album Fairway Full of Miners. This is a really talented band and they give a great live show.