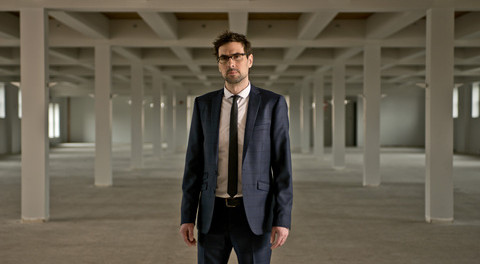 Picture this: the cavernous Église St-Jean-Baptiste. An orchestra sits on the stage, complete with conductor dressed in black. To the right of the conductor is DJ Champion in front of his keyboard and laptop; to the right of him is a small fleet of electric guitarists and bassists and another keyboardist. In the back, an enormous pipe organ. That’s a lot of musicians, and a lot of different kinds of musicians. Now imagine the sound of everyone playing together in a venue whose acoustics resemble a large resonance chamber and you have the beginnings of what it was like to hear DJ Champion and his G-Strings play with the I Musici chamber orchestra at the Église Saint-Jean-Baptiste Friday night, as part of Montréal en lumière.

I must admit that I was a novice—I had never been to a DJ Champion show before and in fact was completely unfamiliar with his music. I had no idea what to expect. I was surprised to see the church so packed (there were at least 1000 people there), interested to see the wide age range among the audience members, and impressed with the complete and utterly rapt attention given by those in attendance.

When the orchestra started playing I was momentarily worried: like a space-age Mahler symphony, the music threatened to plunge us into a sort of late-winter ketamine cave—morose doesn’t even begin to describe it. Hypnotic light patterns projected onto the interior of the church deepened the sense of melancholic trippiness. Bit by bit, however, the various musical pieces came together and the sound evolved into something much more energetic and life-affirming. A male singer and a female rapper both made appearances, giving a bit of textual context to the slowly changing moods. The entire concert was quite conceptual—I had the feeling it mirrored DJ Champion’s fairly recent life experiences of falling ill and recovering. This was perhaps confirmed by the overwhelming audience reaction to the energetic “Alive Again.”

I loved the pace of the concert—musical ideas evolved slowly and imperceptibly, then suddenly erupted into high-octane energy. It was like floating through space and then occasionally slipping into warp drive: awesome. The communication among the musicians, especially between DJ Champion and everyone else, was phenomenal. One thing I’ve noticed over decades of listening to many types of live music is the overwhelming effect of a group of musicians suddenly and precisely falling into some sort of synchronicity. It’s like a drug, and it’s something that this group of musicians exploited to perfection. For instance an electric guitarist would be soloing over a vamp, while the energy gradually built up, then finally DJ Champion would have everyone land in a groove at the exact same time. The crowd went wild, as they say, every time.

I will definitely be following the career of this creative musician. I highly recommend giving him a listen.