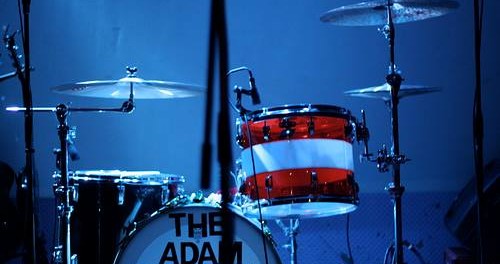 10 p.m. Saturday. I could be somewhere else. But no. I am sitting on my bed listening to this album. It has this sound. It reminds me of Nada Surf. The Strokes, even. I can’t put my finger on it. Headphones on, listening intently. The Adam Brown songs have this ’90s feel mixed with that familiar indie sound. I have to say, the arrangments, the instruments and even the lead singer’s voice are elements I have heard before. A thing, not necessarily a problem, with alternative rock songs. There is this constant feeling that you are listening to the same song over and over only to realize that it results from the combined effort of ten different bands.

The Adam Brown’s new album is not bad. On the contrary. Lead singer Adam Brown started off as a folk singer to finally devote himself to rock. On Sometimes I Try, he is accompanied by Quebec actor Marc-André Grondin on drums and guitarist Shawn Petsche of Calgary’s Napalmpom and manager of the summer festival Sled Island. Engineered at the Montreal recording studio Mountain City by former guitarist of the Canadian indie rock band Adrian Popovich, finishing this album was a long process. The boys worked hard for over a decade. Sometimes I Try was finally released on June 23, 2015. Better late than never. I have to say: it was worth the wait. The Adam Brown offers a joyful sound and well done arrangments.

The album kicks off with Can’t Sleep. Nice. Exactly my mindset. The thousand guitar riffs keep me awake. Sometimes I Try will tempt you to dance. Your nodding head will end up in all directions with a twirling hair swirl. The energy level is high. And suddenly it happens. There is always a highlight to discovering a new album. One’s thoughts suddenly stop. This moment happens to me when It’ll Be Ok begins. Airy atmosphere. Instruments take center stage. Distinctive drums. No lyrics. Only vocal harmonies near the end. I love instrumental songs. I listen to It’ll Be Ok several times. I never get tired of it. The absence of the singer’s voice is not a coincidence. Adam’s hoarse vocals are very well suited for the album’s rhythmic songs. They still work with the slower tempo of Subject of my Affection. On the other hand, after listening to Adam sing his way through four songs, the vocal absence of It’ll Be Okay pleases me. I am not afraid to state that It’ll be OK is my favorite song of the entire album.

Often, I Try sounds cohesive. The song’s transitions are done smoothly. The Adam Brown offers a joyful ride. It is not the kind of music I usually listen to, but I was willing to get carried away. The Adam Brown tried hard and the result is not bad at all. I give the band my thumbs up.

10 p.m. Saturday. Night out and live music. That is the way to listen to this album. You could be anywhere, but these songs were really made to be enjoyed live.