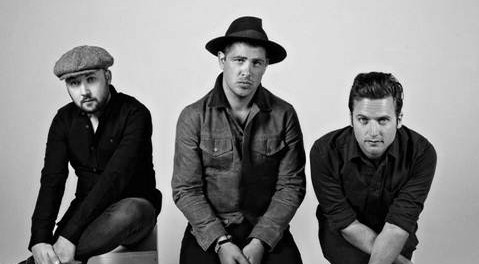 Anthemic American indie rock band, The Augustines, has a big sound to go with its hard working ethos. The band has toured in over 23 countries and plays shows almost every night. Last month, the band released its second album, the self-titled Augustines, a work that serves as a thank you to those who helped resurrect them from the ashes.

Eric Sanderson, the band’s “multi-instrumentalist” explains the origins of the new album. “I think to get a sense of our new record, it’s important to know where it’s coming from with the previous record,” he says. “And the previous record is a very long story. It was incredibly difficult to complete  it and it took a lot of dedication and hard work and a lot of luck and people supported us all over the world to help get it out.”

Once in the story, though Sanderson goes on to explain how the band’s former incarnation, Pela, was popular but broke. “Billy and I were in a band, Pela, for seven years driving around all over the country. We had a really loyal fan base, but couldn’t pay our bills. We were selling out shows, but couldn’t afford to get to them. Pela ended up collapsing. We had massive debt and no opportunity. We had an album we never finished. We had no resources or people to help us get it out.”

Nonetheless, the two decided to persist in the wreckage of that band and finish the album they started. “People came out of the woodwork from all over the world to help,” Sanderson says. “They sent money from all over the world. People created a website and handled early distribution. One thing turned into another. Rob Allen joined the band they started touring again. The new album was released and things snowballed.

“We went from not being a band, and ended up touring over 250 shows in over 23 countries, playing every major festival in Europe and the US and appearing on national TV shows,” he says. “It was a life changing, mind blowing experience.” They never anticipated the success of songs that had been written and recorded in bedrooms and were awed that this deeply personal album reached so many people. “People were singing back lyrics to us and being expressive and open about what it meant to them. It really affected us in a profound way.”

Awed by the energy and good feeling of everyone who had helped them and shared in their journey out of the wreckage of Pela, The Augustines headed to an old, converted church in Geneseo New York to record.
“It’s a really rural area,” Sanderson says. “There’s not much up there. The church had hundreds of instruments and we brought in all our equipment. We tried to harness that energy from stage into a record and make all those life changing into something audible. We got the opportunity we were dreaming for and working for our entire lives, and we wanted to live up to all the expectations we had for ourselves.”

The bulk of the songwriting happened in the church. Bits and pieces had developed on tour. “There might be a chord progression, a melody, or an idea floating around. We might have even jammed some of it during sound check,” Sanderson says. In the church, these were actualized into songs. “Three or four were birthed from that session.”

Wanting to capture their live sound on the album, the song development happened through a jamming process. “Bill might have started a chord progression and then we would all jump in and musically add to it anyway we can and we’d play it for hours. The next day, it would be in our head and then we’d modify and change it,” he says. The lyrics were also developed in an unusual way. “Bill hadn’t written any lyrics,” says Sanderson. “He was using a different technique this time, which made sense. Bill sang over the sounds and improvised, focusing on expressiveness rather than lyricism. After that, he travelled around and had the demos on his phone. While riding around on his motorcycle, he put lyrics to the melodies.”

While The Augustines are known for their live show, Sanderson is a self-professed “studio nerd.” “I love it. I live for it,” he says. “I love walking into a room and having nothing there and you work your ass off. This focus comes over me. Then you walk out with a recording that didn’t exist before.”

Of course, he also loves playing live. “It’s such a unique and expressive form of creativity. It’s a different energy, but it’s one that I love,” he says. “The audience, the room, how tired you are, how excited or healthy you are, all of those feelings effect how you play. You don’t play the same show every day. It’s always changing.”

The Augustines adjust their show to fit their space. “Our last show was in Rochester and the room was cold and small,” he says. “We were looking at it, and decided to play acoustic, that it’ll be more fun and expressive. We set up acoustically and it was great. We could have gone in with our amps, but it didn’t feel appropriate. There was such happy and positive energy from that show.”

“You don’t get that experience in the studio. It’s unique to live shows,” he says. “It’s what makes music one of the most unique art forms. It’s not a private experience. It’s something you’re sharing with people who are listening to what you’re doing. In western culture, it’s so common to put something on pedestal and put lights on it. In other cultures, music is holistic. There’s no separation between the performer and the person listening. I come from that school of thinking.”