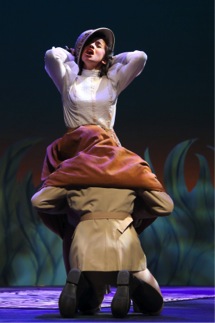 Cloud 9 is a play about sex. No, it’s a play about freedom. Actually, it’s a play about hide-and-seek, giant flowers in Africa, and the Queen of England. To all of these statements, assistant-director Michèle Robinson would probably say “yes”. But to really figure out what was going on in the McGill University production of Caryl Churchill’s play, I spoke to Robinson. The following are the open-ended answers I received, the kind that one should expect from someone who has given enough love to a project that she is ready to just set it free and watch what happens.

Brigitte Naggar (BN): In 10 words or less, what is the play about?

Michèle Robinson (MR): Cloud 9 is about: being bold enough to create and especially to re-create ourselves.

BN: If you could prepare the audience for the show before they witness it, what would you say?

MR: I would say that they are about to have a fun ride.

BN: The play deals with themes of sexuality, identity, tradition and freedom in oppressive and repressive British settings. How do you think today’s Montreal—or more specifically—McGill audience will be able to relate to it?

MR: Cloud 9 reaches a vast audience. Although a Montreal/McGill audience might not know what a Shandy Lolly is, or a Double-Ninety-Nine, they will certainly understand the greater experience that our production offers. Cloud 9 discusses the themes you mentioned, like sexuality and identity, through the experience of every one of the characters in the play. These characters’ struggles are rooted in the Victorian Era and endure the 100-year leap in time; 50 years later, these struggles have transformed, but they surely remain.

BN: Now that your work is done and you’ve seen its fruits, is there anything you would change about the production?

MR: Our goal was to make this show a living force. We can feel it breathe in every performance. It has now taken a life of its own, and that, to me, means that there is nothing more that needs to be done.

BN: What have you learned from your work as assistant director of Cloud 9?

MR: Working with Myrna Wyatt-Selkirk has been such a gift. I remember the email I received from her soon after my return from my exchange in Amsterdam, offering me the opportunity to be her Assistant Director. To think that this unexpected email would spark the most awakening experience in my life so far! I will hold onto everything this experience has taught me about making bold choices, on both a professional and personal level.