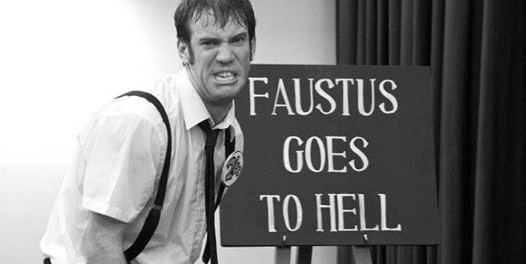 Dr. Faustus (directed by Martin Law) was the Chocolate Moose Crew’s take on Marlow’s classic story of the man who sells his soul to the devil in order to benefit from 24 years of earthly pleasure.

The set was a mess of books, booze, crumpled paper and uneaten food – something between the stoner’s digs and the absent-minded professor’s study. The variety of objects lent the set an eclectic texture, without it feeling cluttered. Though the mess was piled precariously, the actors did not tiptoe around it meekly, but unabashedly knocked stacks over, threw objects across the room in a rage, staggered into furniture, picked things up and put things down. They were well-anchored and comfortable in the space. They did not treat their set like a delicate work of art to be preserved, but an arena to be ravaged.

Faustus (Andrew Cameron) and Mephistopheles (Emily Murphy) sulked, teased and flirted like two students who had been roommates for too long. The way their sexual tension fluttered and turned into stale comfort had a sitcom-ish charm to it. Faustus had just the psychotic grin for his role, and he gave a campy, profound, and thoroughly juicy performance. He existed in the crossroads between frat boy, mad scientist and scared child. As for Mephistopheles, the fire-eyed vixen, she brought all of hell’s psychotic calm to the role, was the apple of Faustus’ eye and the eye of the storm. Also, everyone ploughed through one of the actors having to take sick leave with complete poise, and the host of side characters were still brilliantly funny. I particularly enjoyed the cowardly pope (Director Martin Law replaced Kay Min), whose accent seemed mysteriously Scottish. Well, they warned us it would be surreal…

The pacing in this piece was its weak spot. The acting and atmosphere needed a bit more diversity in order for the high and low points to stand out, and for the characters’ evolution to be compelling. This was also true when it came to reciting the actual lines –- getting too lost in the rhythmic beauty of the language (glorious though it is) lead to a stream of speech that was too fluid and held little emphasis or surprises.

The Moose Crew were strongly connected to the material they were presenting, and their enthusiasm was infectious. If you want to feel terrified, tempted, and a bit silly for seventy minutes, Dr. Faustus is the play you’re looking for.