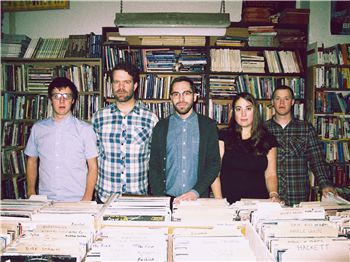 Mat Klachefsky’s personality is wide enough to contain impossible contradictions. He seems fairly nonchalant — if not sort of understated — about his band’s success. At the same time, he’s quite open about being the mastermind behind the music and ready with a strong opinion. No surprise that his band Boats fearlessly embraces polarities in its sound and expression. The indie pop darlings are known for quirky songs layered with musical tensions. Crunchy synths and punchy beats make cheery songs out of more serious lyrical sentiments about death and getting old. On the album, a ballad cozies up to an experimental track like a one-night stand gone right. A catchy hook dissolves into frenetic noise. Eclectic, yes, but every song has a likable, attention-demanding presence. In advance of the band’s arrival at the M for Montreal festival, we caught Klachefsky on Skype to discuss A Fairway Full of Miners, their recent stay at the Banff Centre, and the joy of the southern US.

Montreal Godzilla (MG): How has Boats’ sound changed from Cannonballs (2012) to A Fairway Full of Miners.

Mat Klachefsky (MK): I think we’ve managed to branch out and kind of go in two directions. I tried to make songs that were more mature and complex and kind of obsess over every little part… and then there were songs we wrote in three minutes.

MG: What is that title about?

MK: It’s more of a pleasing image. Yeah it’s more of a feeling than literal thing. I thought of a miner on a golf course — all tiny miners. The miners dig it up and search for precious metals.

MG: How do you guys craft your songs?

MK: On everything so far, I’ve written all the music. I hand it over to the band and tell them all what to play. It’s kind of a dictatorship. But we were just at the Banff Centre at this thing Kevin Drew puts on. We tried collaborative song writing. We’ll be playing a few of the songs that we came out with on the tour. That’ll be fun.

MG: What did you make of the collaborative process?

MK:  It was hard – collaborative songwriting. It added this whole new social aspect. I thought I’m not going to like it. But, it also let us take advantage more of in the moment musical things.

MG: You guys tour a lot. Any thoughts on that? Anywhere stand out in your mind?

MK: Luckily we all like it. I like it. And Louie likes it. Everyone else is a replacement for someone else who didn’t like it. We’ve gone through a few people. A lot of people have a hard time with touring. I could tour all year.

Olympia Washington is the weirdest place I’ve ever been to. It’s a town run by rich homeless people. It’s a weird thing. Then there’s like the southern East Coast [US]. We tour in places that you never really think about like North Virgina. But just going anywhere where I’ve never been before is really exciting.

MG: Any of the songs on the album stand out to you as your favorite or least favorite? Do you feel differently about playing them live than recording them?

MK: I can’t say I have any favorites. I like playing O Jumbotron live. Animated GIFs is fun to play. They’re all fun to play. It’s purely selfish.

MG: What’s up with the releases on cassette tapes?

MK: We just put out one cassette tape.  It was a decision based on budget. We wanted to do a seven-inch, but a cassette is about a tenth of the price and we can put way more music on it. Besides, I think vinyl is stupid.

MG: What’s coming in the pipes?

MK: We’re in a writing period right now. I don’t know what’s going to happen. Hopefully have something out soon, some humdingers.