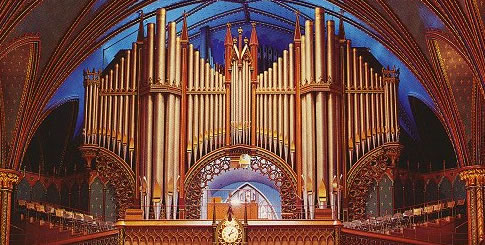 The Canadian International Organ competition (CIOC) is wrapping up in Montreal this weekend. If you like free events, organs, music, or all of the above, then the CIOC is the place to be. I myself, have attended an event that took place on October 11 in a Montreal church, located in Sherbrooke and left dazzled, to put it mildly.

Walking in the church, I couldn’t help but savor the splendid view. High ceilings, spectacular colors, divergent paintings, a delightful cocktail for an enjoyable Sunday afternoon. I wouldn’t want to be anywhere else. I dare to assume that the impressed look on my companion’s face meant that his opinion aligned with my own.

Overall, about fifty people sat on the wooden benches in the church waiting for Sylvain Barrette to play. Since I have never attended an event like this, I did not know what to expect. Looking up I noticed a small screen, where we could see a man I assumed to be Sylvain Barrette, the organ player we were all anxious to hear. I couldn’t help but feel rather disappointed. The screen looked pitiful and sad in this majestic room. Fortunately, when Barrette hit the first note, my concerns evaporated. I felt captivated by the beautiful sounds coming out of the organ. It was like nothing I have ever heard before, simply incomparable to any other musical instrument I have listened to in the past. Barrette’s undeniable love for music also played a big part in the beauty of the performance. I could almost feel the passion behind this music that sounded so angelic and lovely to me. Just thinking about it, I have a hard time finding the right words to describe such poise.

What I also thought was pleasant is that the audience members were not tied down to a particular schedule. We were permitted to come and go in-between numbers. If anyone could not show up at the beginning or had to leave in the middle, it was possible without disturbing anyone. I noted, though, that not many people chose to do so. Looking right and left, I became aware of the audience’s appreciation of the masterpiece. The crowd did not take their eyes off the little screen, where Barrette’s figure was distinguished. The silence reigning in the room was a mutual recognition of the wonders that the artist was doing with his instrument.

Unfortunately, the festival itself is soon coming to an end. But if you happen to have any free time, I recommend stopping by showing these artists your support. Disappointment won’t be on the menu.