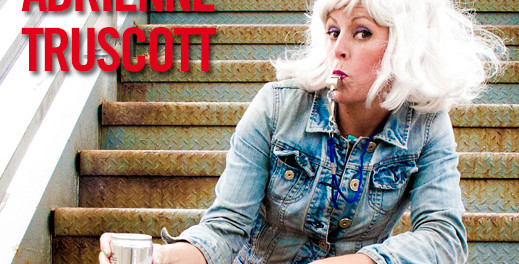 I recently had the chance to chat with comedian, Adrienne Truscott. I actually caught her as she was doing some prop shopping in Manhattan. She told me that her prop store, a Halloween costume shop, is completely run by (most likely fake) teenage vampires who had fangs and fucked up contacts to complete their disguises.  Adrienne’s show Asking For It has travelled across the world, from Australia to the UK and finally to Just For Laughs next week.

Robyn Homeniuk (RH): Are you getting excited for the Just For Laughs festival?

RH: We have a quarter of our downtown that’s set up for spectacles. They’ve got carnival rides and games set up –

RH: Can you give me a snapshot of what your show is all about – try to have no spoilers.

AT: Uh, well let’s see I drink a bunch of gin and tonics, pool people on how ducks spend their days, I robe and dis-robe, I tell a bunch of jokes. And some of them are rape jokes. Oh and I don’t wear any pants.

RH:  For the whole show?

AT: For a better part of the show yeah.

RH: Well, I’m personally a non-fan of pants. I like to call them leg-cages.  What was it that inspired you to write a show about such a provocative topic?

AT: I had been thinking about it anyway, because I think comedy can be the most versatile and clever way to make points about really difficult stuff. I liked that about it, and I had been doing similar stuff – Plus all of this stuff from last year and the year before about all these comics doing rape jokes.  But even before that I had been working on it, I just felt like there was a lot of satire to be had about the way some people and politicians think about the act of rape – What is called rape culture. It satirizes a lot of the views about it, the misinformation, and the total fucking idiotic preconceptions about it. Obviously, it doesn’t satirize the act itself.

AT: Believe it or not, I’m a pretty funny and silly gal. The show is very light on its feet, even though the topic isn’t.

RH: Yeah, the online description says this. It also says that you do some dance?

AT: I mean yeah, not in a modern dance sense of the word. I sort of dance and frolic about a little bit. It’s a pretty cool show for a stand-up show. I come from a circus-dance background too – so I throw in a few tricks too.

RH: I was actually raised on a traveling carnival, so that’ll appeal to me.

RH: I was but I don’t have any cool tricks. I do make amazing cotton candy. Have you had any really crazy reactions to the show? I see you’ve been kind of all over the place with the show.

AT: Yeah, I mean not ALL over. But in the UK, Australia, a little bit in the states. I have had some really crazy and good shows, but nothing super crazy outlandish that’s happened.  I’ve definitely had a show where I have audiences that are pretty wasted and funny. I haven’t been too heckled.

AT: I mean the show itself is pretty crazy. I feel that fills the room up with almost enough crazy and they leave it to me.

RH: So the show is a little bit crazy, but what about you?

AT: I don’t think I’m crazier than the average person.

AT: I like to make bold choices as a performer, but I think that’s one of the nice things about performing. The stage opens up a lot ways that you’re allowed to behave, ways you wouldn’t behave if you were just walking through at the park.

RH: That’s definitely true.  So you mentioned that you don’t wear pants during the show.  Do have fun with the non-pants-ness of your show?

AT: Yeah, obviously nudity can be deployed all kinds of different ways and certainly I’ve been called out. “Hey she’s not wearing pants – that’s a gimmick.” And I’m like, “No shit, fuckwit. Of course it’s a gimmick.” It’s like, “‘Ooh, I wish I’d thought of that’… but oh wait I did.” And obviously the female body is a zone for a lot of crazy discourse and many conversations. I think it’s still a powerful and playful way to bring a attention to bring attention to the female body and what we think about it, what it means and what it’s allowed to look like, how it’s supposed to move and behave. I have evolved!

RH: Yeah, evolution! I think a lot of us females out there have also evolved, but not all of us are brave enough to actually stand up and tell people about it.

AT: Yeah well, you know we all get there and do whatever we want to do the way that we feel comfortable. I just happen to fee possibly ridiculously comfortable naked. I consider myself lucky I guess.

AT: Yeah! I was always a little bit of a streaker. I have always thought it was funny – I thought it was hilarious. My best friend and I got quite excited, when we were little, when she moved into a house with a pool. We were like, “OMG it’s so fancy to have your own pool!” We used to make lots of shows for the neighbourhood, and we made a synchronized swimming act. And then we invited the whole neighbourhood and surprised them by doing it naked. We thought, “they’re never going to expect this!”  and it was hilarious. We couldn’t afford costumes, and we could match this way.
RH: Yeah that’s definitely an easy way to match – just take off your clothes.

AT: Yeah, it’s cheaper and it gets more attention.

RH: Definitely true. I’ve been wondering about your promo photo – the on the stairs with a beer case. Are you really nude in that picture?

AT: Yep, from the waist down. It’s on a staircase leading up to a subway, which is in Bed-Stuy, Brooklyn. I was on the stairs with a six pack and my friend took a photo of me.

RH: Those stairs looked pretty dirty, that’s why I was trying to figure out if you were actually nude or not.

AT: I would like you to know that I did lie something down to sit on. But the point is that I’m dressed provocatively, I’m drinking beer, and I’m by myself. I’m not wearing pants in a dodgy part of Brooklyn – following the logic of ladies shouldn’t walk home alone at night because they’ll get raped…I was like, well then I should get raped right? We did shots at night too – my point in using the photo is that you can actually walk around Brooklyn at night with no pants on and not get raped IF there are no rapists around. That is the key ingredient, it doesn’t matter what I wear or what I do. It’s not our responsibility to not get raped.

RH: Exactly, it’s the responsibility of people to not rape people.  I’ve got one more question, which I’ve been dying to ask – as I sit here with my cat. Are you a cat or a dog person?

AT: I’m totally a cat person.

RH: Any last words for the Montreal Audience before they come out and see your show?

AT: From everything I’ve heard, it’s a really fun festival. If you’re fun and cheery, and up for something a little different – come on out! It’s not the average stand-up show.