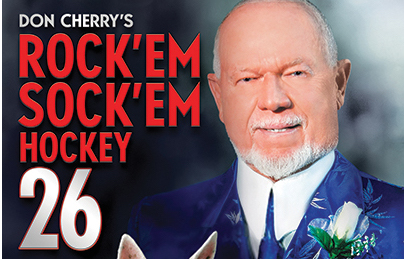 When I was offered the chance to review “Don Cherry’s Rock ‘Em Sock ‘Em Hockey 26” my first reaction was “They still make those?” My second was “Will it make sense if I haven’t seen the first 25 volumes?” It would seem to me that in 2014, selling what is essentially a compilation of YouTube clips (albeit in stunning High Definition Blu-ray disc), isn’t exactly a good idea. But hey, what do I know? To date, the “Rock ‘Em Sock ‘Em Hockey” series has sold over 2 million units, which gives us an average of over 75,000 units per volume. If this were a CD, it would have a shot at number one on the Billboard chart today.

So what is “Don Cherry’s Rock ‘Em Sock ‘Em Hockey 26”? (Man, this title is awesome for my word count) It’s a compilation of Goals, Hits and Saves from the 2013-2014 NHL Season, lovingly narrated by the iconoclastic Don Cherry, the man with the thousand ugly suits. Don Cherry is of course the host of “Coach’s Corner”, a permanent fixture of CBC’s Hockey Night in Canada broadcast and now on Rogers since they won over the rights by forking over an indecent amount of money. Cherry still has an undue amount of attention lavished on him, and his vocal defense of “real hockey” (i.e. good old Canadian boys working hard in the corners, banging up opponents and playing well without the puck), our troops and the leadership of Rob Ford and Stephen Harper, have assured him a regular spotlight in this country and beyond. Proof? On a recent trip to Buffalo, NY, I was able to order “Don Cherry Cherry Wheat” beer at the Pearl Street Grill & Brewery. Decent brew too.

Don Cherry’s hockey pedigree is long, but not so glorious. As a player, he was a career minor leaguer who played exactly one game in the NHL when he was called up by the Boston Bruins during the 1955 playoffs. His coaching career fared much better as he was Coach of the Year in the American Hockey League in 1972 and 1974. That earned him a shot at coaching the Boston Bruins, a team that was coming off back to back Stanley Cups and three consecutive first place positions. As the reigns of offensive stars Bobby Orr and Phil Esposito were coming to an end, Cherry remodeled the team into the “Big Bad Bruins” with an emphasis on checking and grinding, as well as so called “enforcers”. Under Cherry the Bruins reached the Finals twice and lost both times to the Montreal Canadiens.

These days, Cherry is mostly known for his inability to count to five, as in his last game behind the Boston bench, with two minutes to go in game 7 of the Semi-Finals and a one goal lead, the Bruins got caught with too many men on the ice. During the resulting Montreal power play, Guy Lafleur tied the game, and the Canadiens went on to win in overtime. After two miserable seasons as coach of the Colorado Rockies, Cherry became an analyst at CBC, a role that didn’t last long because he had a tendency to be partial to either the Toronto Maple Leafs or the Boston Bruins. So “Coach’s Corner” was created to provide him with a public funded platform for his very specific opinion on what makes good hockey.

So by having his name on the cover, you sort of know what you’re getting into. Grapes, as his admirers call him, shows up to introduce each section, and will narrate the montages in a dull voice that betrays his age. The most troubling is the Saves montage, where Cherry calls out each goaltender’s name in a monotone voice that was actually TIMED TO THE MUSIC. Yes, it’s Don Cherry rapping! It’s like those wrestling music videos from the 80’s!

There’s some terrific footage included in all segments, but some sequences hardly seem like “best of the year material”, and some of the Hits even seem suspension worthy. The best part is the segment on the 2014 playoffs, where Cherry’s narration actually tells a story. He’s even able to pull off an impartial analysis of his Bruins’ defeat at the hands of the Habs. There’s a few clips from Coach’s Corner, and a section called Tea Time. As Cherry describes it, that’s the segment where weak natured hockey fans should go have tea while the real men watch fights. But the section is so brief that it’s hardly worth inclusion, and is probably only there to pay lip service to Cherry’s reputation while the NHL is trying to crack down on fights.

I realize that there’s nothing much I can say about this release that will change anyone’s mind. If you’re one of the people who voted Cherry among the 10 greatest Canadians of all time (I kid you not, that really happened), then you’ll love this. If you think the man is a fool, you’ll love to hate him. And there’s enough hockey to please all fans of our national religion. I mean sport. I imagine that 99% of these discs will be bought to be given as gifts; it’s not a coincidence that they always come out right before Christmas. Much like Cherry, these releases are becoming quite anachronistic in the YouTube era where one can view thousands of clips (nhl.com alone could keep you busy for hours). It also feels like a one time viewing; I can’t imagine guys getting together, opening a few beers and putting this one to pass the time, even during the 48 minutes * in the summer where there’s no hockey. But as a stocking stuffer, you could do worse for the hockey fan in your life.