Imagine a post-apocalyptic Charlie Chaplin film with robots, puppets, a string quartet and a scratch DJ. This is Kid Koala’s staggeringly complex live adaption of Nufonia Must Fall, which was slotted for six performances at Montreal’s Place des Arts from September 2-5, 2016.

The live Nufonia Must Fall experience is based on his original “silent” or dialogue-free graphic novel by the same name, and integrates layer upon layer of live art and music. Equal parts cinema, theater and concert, the show involves over 50 puppets and 17 miniature stages. Four cameras film the intricate details of the sets and puppets, which are then projected overhead onto a big screen.

The whole experience is scored live by the Afiara String Quartet with Kid Koala on turntables, percussion, ukulele and piano, creating intense drama and intrigue.

The show is directed by K.K. Barrett, who was nominated for an Oscar for production design of the 2013 film, Her, and has worked on many notable films including Being John Malkovitch, Lost in Translation and Where the Wild Things Are, as well as many music videos. The impressive direction and cinematography is choreographed to the last detail, with beautiful depth of field and elaborate camera pans, weaving all the miniature elements of the puppet show onto a grand scale onscreen and into an organic whole.

“It is by far the most complicated show we’ve ever attempted to put together as a team. But with all those moving parts happening, we hope that there’s still this very fluid unified feeling that we can create,” says Kid Koala, a Montreal scratch DJ whose real name is Eric San. 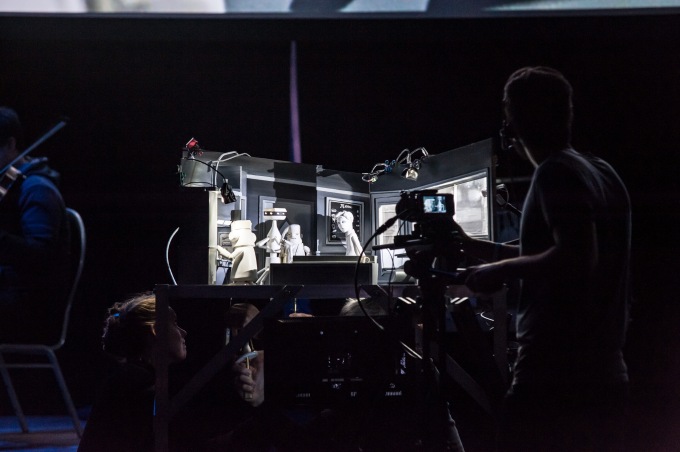 To complicated matters, the show must be compact and packable for touring. Nufonia Must Fall made its debut at Toronto’s Luminato Festival in 2014 and has been touring for the last 2 years – and it will continue to tour for at least another two years.

The show requires the extreme coordination of many precise moving parts: the possibility of human error presents an element of danger – any small mistake could be catastrophic. Yet the performance was flawless with Kid Koala looking relaxed and playful throughout, working intense precision with ease and finesse.

To loosen up the audience, Kid Koala kicked off with a warm bilingual welcome to his home crowd and a round of bingo with quirky references to the elements of the show. The bingo winner received Nufonia Must Fall swag that included multiple books, a cassette and a “fragrance collection”. 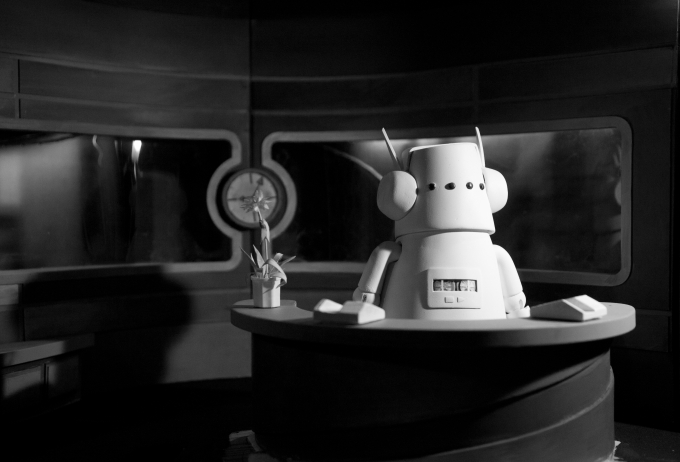 The title Nufonia Must Fall may sound ominous but it’s actually a tender love story between an untalented earphone-wearing robot who tries to woo a lonely office workaholic, Malorie, through his music. The word Nufonia comes from the words “no fun” which can be a physical location or a state of mind. The couple attempts to escape their oppressive lives in Nufonia and find solace together amidst a series of misunderstandings and disappointments.

The white plastic puppets, the grayscale sets, the dramatic lighting and elaborate score, re-create the stark sci-fi landscape of the original novel. Warmth and emotion is conveyed by subtle movements of the puppets and the musical genius of Kid Koala and the Afiara Quartet. The entire show requires great artistry and coordination with so many moving parts and an almost obsessive attention to detail. Nufonia Must Fall is inspired by Charlie Chaplin films, many of which are black and white, silent and scored with only music and sound effects. “When I was a kid, I grew up watching those with my family. It was three generations of my family all huddled together watching this dialog free film and all laughing or crying, simultaneously. It was a unifying experience,” recounts Kid Koala.

Similarly, there were multiple generations of families, including small children, Kid Koala fans, theater geeks and adults of all ages in attendance at Place des Arts. The show’s production crew is also a big family with husband-and-wife creative duos and a slew of children to manage amidst the show’s hectic touring schedule. Kid Koala’s wife is a longtime artistic collaborator as well as the show’s stage manager. One of their two daughters is even credited for a piano solo in the score.

For decades, Kid Koala has been well-known as a Montreal scratch DJ. He has collaborated with some of the biggest names in the business and toured with Radiohead, Bjork, The Beastie Boys and Arcade Fire. He’s contributed to the music of films like Shaun of the Dead, The Great Gatsby and even Sesame Street. He has been part of renowned musical collaborations such as Gorillaz, Deltron 3030, The Slew and Lovage.

What sets Kid Koala apart from other DJs is his ability to play his turntables like a musical instrument by dragging a single note under the needle at different speeds, creating different pitches that waver and bend. His trademark style involves the use of unusual musical samples old cartoon television shows like Charlie Brown and Road Runner, to people sneezing, a “drunk” trumpet, old sketch comedy routines and the old song Moon River. Kid Koala is also an illustrator having designed all of his own album covers, and two graphic novels.

For a month leading up to the live Nufonia Must Fall shows at Place des Arts, Kid Koala put together a series of free “Koalapalooza” events across Montreal. The events included a finger puppet and cardboard gramophone craft workshop, a robot dance party at Marché des possibles, an edition of Music to Draw To where participants bring sketchpads while Kid Koala spins some tunes,culinary collaborations with Montreal restaurants Joe Beef, Le Bremner, Aux Vivres and ice cream shop, l’Armoire à Glaces – all with music by Kid Koala.

Over the two years of touring, Nufonia Must Fall has evolved organically with all players fine tuning and developing their performance. For example, the musicians may change a certain phrasing of the score to match a certain puppet movement. Some elements of the performance can also be improvised to match the mood and the location of the show. The players must also adapt to different stage sizes and set-ups depending on the venue.

The magic of the show is seeing the making of and the result at the same time, as well as the unpredictability and emotion of a complex live performance.

“We actually get to test the limits of what we can do in this show,” affirms Kid Koala.