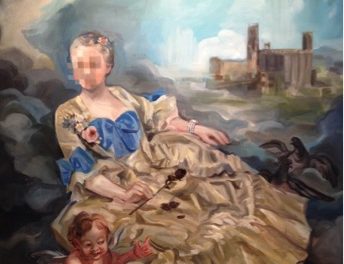 An eighteenth-century aristocratic woman wearing a pastel yellow dress, specifically a mantua, reclines on a bed of dark and seemingly polluted clouds with hovering pigeons. She would appear to be gazing at the viewer, however, her face is pixelated, obstructing her identity. A cherub floats on her lower right-hand side, spray-painting the skirt of her lavish dress. Within the blurred distance of the canvas, one of Lachine Canal’s long-standing factory plants, possibly Canada Malting Co., is painted, converging time and space as the aristocrat floats above Montreal. Allegory of Graffiti Two is the first artwork the viewer is presented with in Miss Terri’s solo exhibition, Rococorrosive at Artgang Gallery. Suitably, the painting hangs just outside the entrance of the gallery space as it depicts juxtaposing styles and concepts, central to the exhibition: rococo, graffiti and the urban landscape. Although she is better known for her graffiti, Rococorrosive showcases Miss Teri’s multidisciplinary practice, such as drawings, paintings, sculptures, embroidery and wallpaper.

Rococorrosive focuses on the fusion of art history, decorative arts and urban architecture, particularly, the appropriation of the style of rococo through French painters and interior design, the aesthetics of graffiti, and the industrial cityscapes of Montreal. The title, in itself, plays with the words “rococo” and “corrosive” – two distinct qualitative terms referencing the beautiful and the harmful. It is important to understand that rococo was an eighteenth-century French style of aesthetics suited for the nobility; it is associated with elegance, lightness and frivolity through its use of pastel colors and curving lines, seen in architecture, interior design, sculpture and painting. By fusing rococo with the corrosiveness of graffiti through spray-painting, in combination with the grit and potential danger of the urban space, Miss Teri recreates pictorial scenes through stylistic juxtapositions, questioning beauty in the cityscape while simultaneously beautifying the streets, as well as urbanizing and democratizing the aristocratic style of rococo. For instance, drawings of reclining eighteenth-century women with graffiti tags fill the exhibition. Ceramic sculptures of construction cones and a nude bust humorously named Montreal Archeology, is displayed on a plinth, while Jean-Honoré Fragonard’s The Swing is appropriated in a painting with a mundane overpass in the background and a spray-can decorated in rococo aesthetics is encased in a glass cover.

Pleasantly, the gallery has transformed the white-cube space into a neo-rococo room; a rich burgundy colors three of the walls, while the fourth is covered in repeated patterns of a cartoonish hand, cut-off with dripping blood, holding a bouquet of flowers. Resembling a “cabinet of curiosities”, as Miss Teri deems it, the artworks are small in size, providing a sense of intimacy, as the viewer must stand close in order to observe the small details.

Rococorrosive brings a sense of playfulness through Miss Teri’s combination of aesthetics while engaging with the history of art. Find more details about the exhibition here.