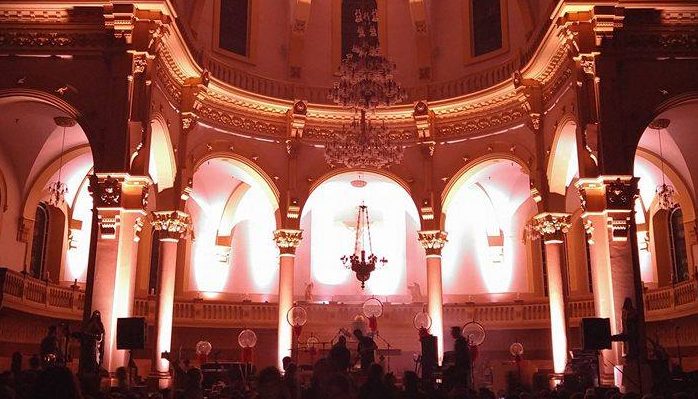 Live, Watson makes me think of a chef or even a chemist, free from the shackles of work and salary, concocting specials from the safety of their own home, enjoying a hobby. A little bit of this, a little bit of that. More tremolo, a fair bit of chaos, ample harmonies, less acoustic guitar; the latter which, for a band that has been called some sort of ‘folk’, is quite a strange choice. Of course, the reality is that the label is a long stretch. While many bands who refrain from pigeon-holing still have a core sound, Patrick Watson simply evokes that free-wheeling spirit better than most. So, us writers stick to adjectives: peaceful, awesome (in the original spiritual sense of the word), sanguine.

On a stage that Le Festival Santa Teresa gave us on Friday night however, Watson seemed even freer, joyful, totally in his safe place. Almost like a little kid who gets keys to the Lego Kingdom. Under the vault of L’Église Sainte-Thérèse d’Avila, Patrick Watson and co. charmed a sold-out audience with mostly newer songs. The first half of the set was from their 2015 album, Love Songs For Robots. The band had a trio of female vocalists (whose names I unfortunately failed to catch) who formed a perfect fulcrum for Watson’s own falsetto voice. ‘Angelic’ is a giveaway adjective here, given the context, but such were the soaring vocals that opened the set that everyone knew they were in for something special.

More than any other show I’ve been to, the show was a chance to see the individual components that made up Love Songs. It’s remarkable, especially to a non-musician, how the album’s panoply of sounds come principally from four people. On songs like ‘Good Morning Mr. Wolf’, Watson’s a restless mad scientist, switching from acoustic guitar to piano to keys, standing up and sitting down. Joe Grass on guitar pedaled his way from standard rhythm strumming to big, fat, wallops of lead guitar notes, to whale-like, well, wails. His slide guitar playing was exquisite, every note left to trail just a second longer than you thought was needed; turns out that his timing’s better than yours. I personally loved realising that the underwater-like guitar solos in ‘Grace’ was actually Mishka Stein’s bass on effects, higher on the fretboard and played with a pick. Speaking of delectable instrumentation, there’s not a lot more endearing than Watson singing through a megaphone in a quiet church.

This leads me to segue into their off-the-cuff segment that they’ve been doing in recent shows. A wardrobe mishap in which Watson’s back pocket was left flapping about was used as the title for an improvised song, ‘Jesus In My Back Pocket’. This featured Stein and Grass on acoustic guitars, playing a slightly flamenco-tinged rhythm to Watson singing about the title track. Now that’s a song that won’t be released anytime soon. It was also a chance for the band to try out two new full band songs, both Untitled. Lacking the familiarity one would have from an album they were nonetheless quintessentially Patrick Watson and gives us hope for a future album release.

The encore was a delight, ensuring those who would be going back for the second show that it would be worth their time. One more new song preceded the band, the vocalists, Louis-Jean Cormier, and a guest trumpeter, all crammed around one microphone—Watson constantly stepping off and on stage to look for space—to play ‘Into Giants’. Most of them said their goodbyes and then the lights went darker, Watson playing ‘Lighthouse’ with the trumpeter now in the middle nave, as regal as a knight off to battle. I could mention other things that pleased me: the lasers, the mise-en-scène, or the time Watson rhetorically asked us if we wanted a long or short show. You know there’s really only one answer.