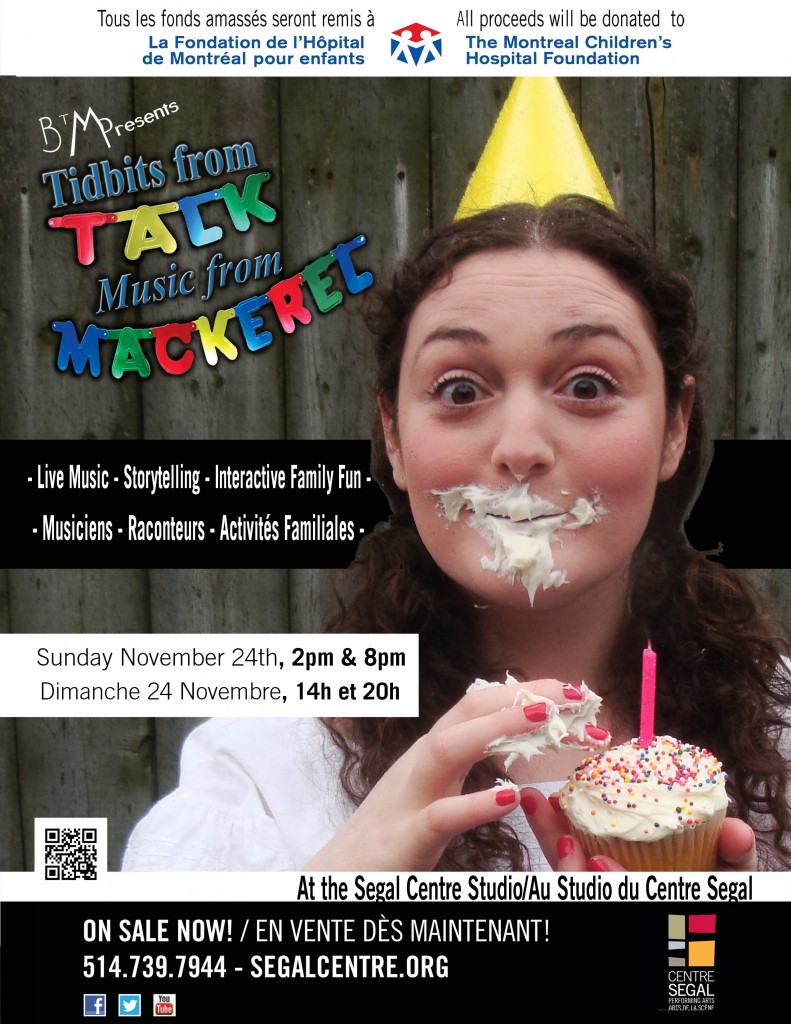 Tidbits from Talk, Music from Mackerel, starring Sarah Segal‐Lazar, was a fundraiser for the Montreal Children’s Hospital Foundation.  The play was presented as a radio show starring Leslie and her Band of Merry Misfits, a group of children with exciting stories and soothing music.

But first, word to the wise – DO NOT forget the name of the play you want to see at the Segal Center ticket booth.  I did – when asked, I said, “You know…  the birthday play!”  Seeing as the advertisements for the play were all birthday party themed with cake, pointy hats, and streamers, not to mention the fact that the only other thing playing was Othello, I thought for sure my description would be clear enough.  But the man behind the counter, who had the appearance of Santa’s far less jovial twin, looked down his nose at us (an impressive feat, seeing as we were standing and he was sitting), and said, very slowly, enunciating every word; “The.  Birthday.  Play?”  The memory of his icy glare still gives me chills.

After that terrifying ordeal, the announcement told us to go through the doors, and we and several other members of the audience did – only to be told we had in fact used the wrong entrance, and had to line up to show our tickets. After, an audience member sat in the wrong seating area and was told to move.  Seriously guys – lock the door you don’t want people to come through.  Rope off the chairs we’re not meant to sit on.  It’s not that difficult.

My annoyance immediately dissipated, however, the moment I heard the first song.  Leslie Moira Ducanaine and her band of merry misfits were stunning.  The songs were typical folksy ballads about lost love and being on the road for too long, but they were performed impeccably.  I even got teary-eyed during a couple, and I bought the cd at the end of the show — it only contained five songs, but the hand-drawn doodle on it really sold it.

The stories in between the songs, despite being hit-and0miss, went by at a steady trot.  The show, all in all, was well-paced, and only dragged a little bit at the end — but hey, it was a cold Sunday afternoon — I had nowhere to be.  I just snuggled into my coat and relaxed to the crooning of a song about the beautiful maple trees of Canada.

During the intermission, the audience was invited to write down messages to be read “on air”.  The idea was to get messages like, “Hello to all the folks back home from Johnny.”  Instead, Leslie found herself trying to keep a straight face at messages like (the first one to come up), “I’m Batman.”  For me, this moment pretty much sums up the show.  Flawed and kooky, but also weirdly wonderful.

And when push comes to shove, there’s really nothing better than having a quiet cry on account of lovers past, a bit of a giggle at an irreverently awkward joke, and snuggling into a cushy theatre seat on a cold winter’s afternoon.