The Travels of Babar and Other Ports of Call.
Tweet

Babar the elephant has captivated the hearts and imaginations of children all over the world for almost a century. Babar first appeared in 1931, in the iconic French children’s picture book, The Story of Babar: The Little Elephant, by author and illustrator Jean de Brunhoff. The book is based on a tale that Brunhoff’s wife invented for their children. 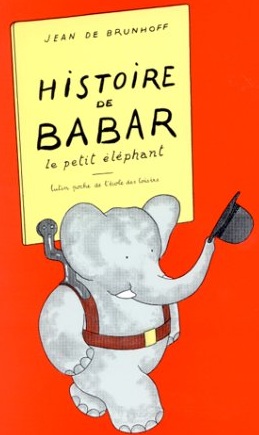 On Sunday March 15th, the world premier of the orchestral adaptation of Brunhoff’s The Travels of Babar: Return to the Land of the Elephants, was performed in Montreal’s Maison Symphonique. Acclaimed composer Raphael Mostel created the musical score and provided the artistic direction for this modern adaptation. “My favorite among Jean’s books, The Travels of Babar, is full of alarming and amusing twists of fate…this is a tour de force,” says Mostel.

The performance began with the only other concert-work to have been granted permission by the author’s family: Francis Poulenc’s 1940 composition based on the first book, The Story of Babar: The Little Elephant. This marks the first time both works are on the same program. 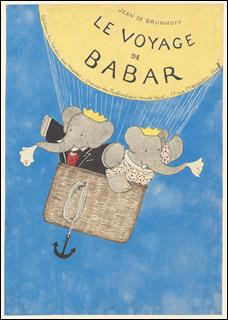 The music was performed by one of the world’s greatest orchestras, the Orchestre Symphonique de Montreal (OSM), in one of the finest concert halls in the world. The young, energetic and versatile Dina Gilbert conducted the roughly ninety musicians that made up the orchestra.

The music was set to stunning HD quality projections of the original watercolours by Brunhoff. The Bibliothèque nationale de Paris, the Morgan Library, the Kendra and Allan Daniel Collection, and several private collectors provided the high-resolution scans of the original watercolours expressly for Mostel’s music arrangements for The Travels of Babar. 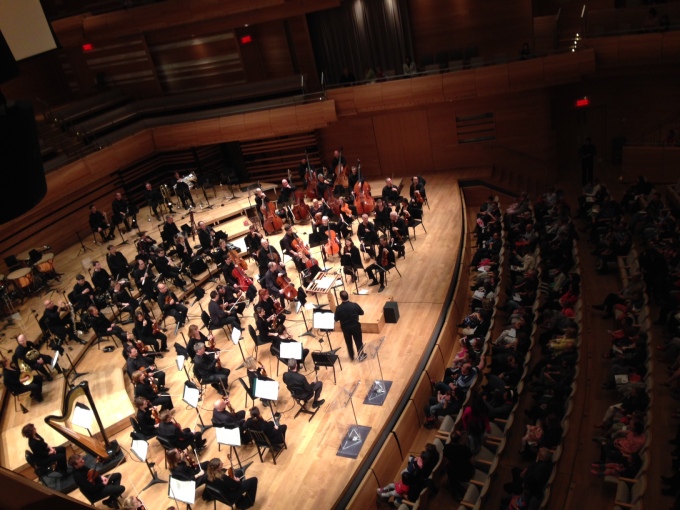 The OSM setting up before the Travels of Babar performance

Actors Sophie Cadieux and Pierre Brassard narrated the two stories in French. The simple but poignant story was interspersed with short, dynamic orchestral pieces illustrating the drama of the books – perfect for the attention spans of the 5-10 year olds that occupied the concert hall but also highly entertaining for the accompanying adults.

The Story of Babar begins with Babar as a baby, whose mother is killed by a hunter. Babar escapes and leaves his home in the forest, visits a big city and returns to his community of elephants in the jungle. He learns that their king has died from eating a poisonous mushroom. Babar is appointed king of the elephant kingdom and marries his queen Céleste.

In Brunhoff’s second book, The Travels of Babar, Babar and Céleste leave by hot air balloon to their honeymoon, and then return to the Land of the Elephants. However, what awaits them is a war with the rhinoceroses. Babar wins the war by having the elephants paint monster faces on their backsides, which cause the frightened rhinoceroses to run away. Babar then restores peace and happiness in their community.

For the final and third part of the show, Babar and his family travel to various ports of call, in Spain, Asia and the United States through works by Bizet, Debussy and Ravel.

Mostel has musically illustrated each scene of the book in a masterful and emotional score. The magnificent orchestral music and clever narration was skillfully synchronized with the iconic watercolours to create an organic multimedia experience. The OSM’s Music Director Kent Nagano describes Mostel’s musical adaptation as “wonderfully witty and universal.”

Many of parents in attendance grew up reading the stories of Babar. This innovative musical adaptation was particularly effective because parents could relive their childhoods through their children’s eyes, some of whom were hearing the stories of Babar for the first time. Indeed, Mostel has taken a beloved classic tale and given it a modern twist.